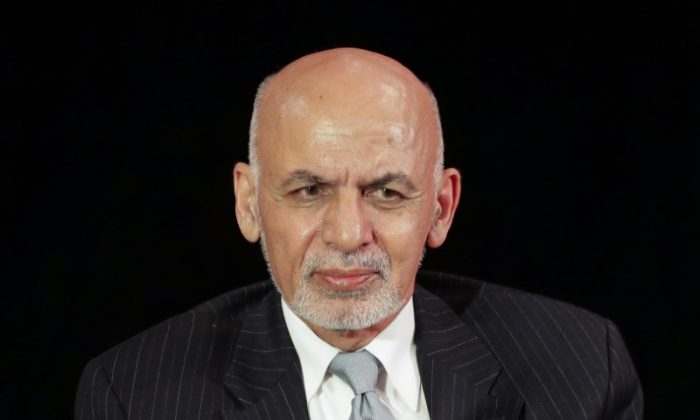 KABUL—Afghan President Ashraf Ghani on Thursday announced for the first time an unconditional ceasefire with the Taliban, but excluded other terrorist groups such as ISIS.

The decision came after a meeting of Islamic clerics this week declared a fatwa, or ruling, against suicide bombings, one of which, claimed by ISIS, killed 14 people at the entrance to the clerics’ peace tent in Kabul, the capital.

The clerics also recommended a ceasefire with the Taliban, who are seeking to reimpose strict Islamic law after their ouster in 2001, and Ghani endorsed the recommendation, announcing a laying down of arms until June 20.

Ghani has urged ceasefires with the Taliban before, but this was the first unconditional offer since he was elected in 2014.

“This ceasefire is an opportunity for Taliban to introspect (sic) that their violent campaign is not winning them hearts and minds,” Ghani said in a message on social network Twitter after a televised address.

U.S. Forces-Afghanistan said they would honor the ceasefire.

The ceasefire would not include U.S. counter-terrorism efforts against ISIS and al Qaeda, it said.

NATO Secretary-General Jens Stoltenberg welcomed the announcement, which he said: “shows the seriousness of President Ghani and the Afghan government.” Both he and the United Nations urged the Taliban to reciprocate.

The United States and Russia also praised the decision.

“The Afghan government’s offer of a temporary ceasefire underscores its commitment to peace as both a national and religious responsibility,” the State Department said in a statement.

But former Afghan army general Atiqullah Amarkhel said the ceasefire would give the Taliban a chance to regroup.

“From a military prospect, it is not a good move,” he told Reuters.

He also said he doubted the Taliban would lay down arms and deny themselves the opportunity of fighting during the month of Ramadan, in which attacks have intensified.

The end of Ramadan falls at the end of next week.

Ghani in February offered recognition of the Taliban as a legitimate political group in a proposed political process that he said could lead to talks to end more than 16 years of war.

Ghani proposed a ceasefire and a release of prisoners among options including new elections involving the militants and a constitutional review in a pact with the Taliban to end a conflict that last year alone killed or wounded more than 10,000 civilians.