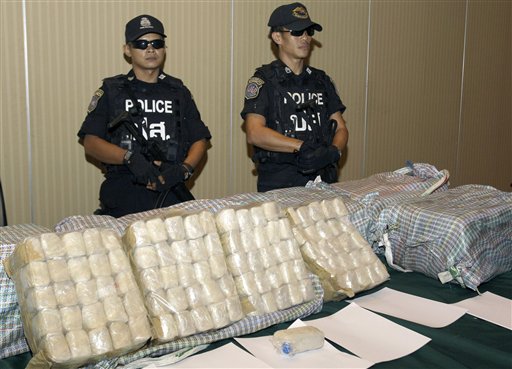 FILE - In this March 16, 2012 file photo, Thai policemen guard packages containing about 2 million methamphetamine pills seized in Lampang province, prior to a press conference at the police headquarters in Bangkok, Thailand. Seizures of crystal meth and methamphetamine pills reached record highs in East and Southeast Asia in 2012, with Myanmar retaining its status as a major supplier of the illicit drugs, the United Nations said Friday, Nov. 8, 2013. (AP Photo/Sakchai Lalit, File)
Health News

The illegal drug Methamphetamine is far more damaging to younger brains than adults. It causes severe damage to the region of the brain that controls “executive function,” according to a University of Utah press release.

The study was a joint effort by University of Utah and University in Seoul. It focused on adolescent and adult meth users in South Korea. Users were given MRI brain scans, which revealed a severe decrease in the the gray matter in the frontal cortex of younger users when compared with adult users. This region of the brain is believed to be responsible for organization and reasoning, also known as “executive function.”

Another type of brain scan called a diffusion tensor imaging (DTI) was performed on the users. This scan revealed damage to white matter structures in the brain that was once again more severe in young users than adult addicts.

Researchers were shocked by the severity of the damage to cortical thickness in the frontal cortex of young brains.

“It’s particularly unfortunate that meth appears to damage that part of the brain, which is still developing in young people and is critical for cognitive ability. Damage to that part of the brain is especially problematic because adolescents’ ability to control risky behavior is less mature than that of adults. The findings may help explain the severe behavioral issues and relapses that are common in adolescent drug addiction,” said In Kyoon Lyoo University in Seoul, South Korea.

5 Things Parents Can Do to Help Young People Escape Ice

Scanning the brains of 111 adolescents and 114 adults made this one of the largest studies of its kind. Of the young users, 51 used meth while 54 of the adults were users.

These results show that it takes much less meth to do much more damage to younger brains.

“There is a critical period of brain development for specific functions, and it appears that adolescents who abuse methamphetamine are at great risk for derailing that process. I think the results show it is hugely important to keep kids off drugs,” said Perry F. Renshaw, University of Utah USTAR investigator and professor of psychiatry.