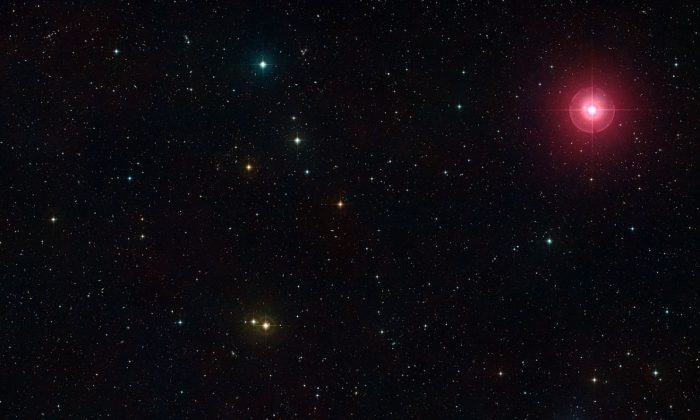 A photographic view created from the Digitized Sky Survey 2 of part of the constellation of Cetus (The Sea Monster). The bright red star at the upper right is the famous variable star Mira (Omicron Ceti) and towards the lower left is the region of space studied in a new survey, using ESO’s VLT and the SINFONI instrument, of the feeding habits of young galaxies as they grew through cosmic time. (Digitized Sky Survey 2. Acknowledgment: Davide De Martin.)
Science

The earliest galaxies were much smaller than the spiral and elliptical galaxies that populate our universe nowadays. At first they gained mass by absorbing gas from the interstellar medium, but mergers with other galaxies helped them fill out during their so-called teenage years.

An international team of astronomers used the SINFONI instrument (Spectrograph for INtegral Field Observations in the Near Infrared) on the VLT to look at these young distant galaxies in detail.

“Two different ways of growing galaxies are competing: violent merging events when larger galaxies eat smaller ones, or a smoother and continuous flow of gas onto galaxies,” said research leader Thierry Contini from France’s Institut de Recherche en Astrophysique et Planétologie (IRAP) in a press release. “Both can lead to lots of new stars being created.”

The survey yielded some unexpected results, for example, many of the adolescent galaxies had heavier elements concentrated in their outer regions, unlike present-day galaxies.

“For me, the biggest surprise was the discovery of many galaxies with no rotation of their gas,” said team member Benoît Epinat at France’s Laboratoire d’Astrophysique de Marseille in the release.

“Such galaxies are not observed in the nearby universe,” he added. “None of the current theories predict these objects.”

The scientists will continue to analyze the data set, and also use other instruments to examine the cold gas in these galaxies.