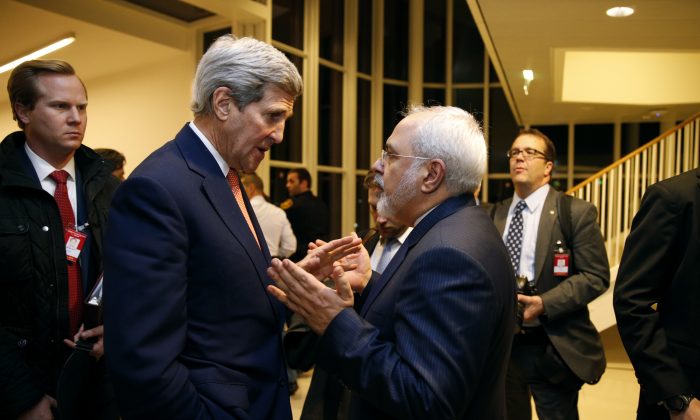 FILE - In this Jan. 16, 2016 file-pool photo, Secretary of State John Kerry talks with Iranian Foreign Minister Mohammad Javad Zarif in Vienna, after the International Atomic Energy Agency (IAEA) verified that Iran has met all conditions under the nuclear deal. The Iran nuclear accord is fragile at its one-year anniversary. Upcoming elections in the U.S. and Iran could yield new leaders determined to derail the deal. The Mideast’s wars pit U.S. and Iranian proxies in conflict, with risks of escalation. Iran's ballistic missiles are threatening American allies in the Arab world and Israel, raising pressure on the United States to respond with force. (Kevin Lamarque/Pool via AP, File)
International

A Year Later, Iran Nuclear Deal Is Holding but Fragile

WASHINGTON—The Iran nuclear accord is fragile at its one-year anniversary.

Upcoming elections in the U.S. and Iran could yield new leaders determined to derail the deal. The Mideast’s wars pit U.S. and Iranian proxies in conflict, with risks of escalation. Iran’s ballistic missiles are threatening the Middle East, raising pressure on the United States to respond forcefully.

But for now, the seven-nation nuclear pact is holding. Washington and Tehran are expanding cooperation beyond any level imaginable back when the Iranians were edging closer to nuclear weapons capability. And Boeing’s recent announcement of a multibillion-dollar plane deal with Iran Air suggests some of the agreement’s early problems may be working out.

“It really wasn’t long ago that we saw a rapidly expanding nuclear program in Iran, only months away from having enough weapons-grade uranium to build 10 to 12 nuclear weapons, and we were on the cusp of confrontation,” Secretary of State John Kerry said recently.

“We have changed the strategic equation.”

A year ago, on July 14, 2015, the United States, six other world powers and Iran finalized almost two years of negotiations on the Joint Comprehensive Plan of Action. The pact outlined what Tehran had to do to pull back its nuclear program from the brink of weapons-making capacity. It spelled out the West’s obligation to end many of the financial, trade and oil sanctions that had battered Iran’s economy.

Iran has lived up to its end of the deal. It shut down thousands of centrifuges for enriching uranium and exported almost its entire stockpile of the bomb-making material. It disabled a heavy water plant that would have produced plutonium usable in a weapon. It opened up its supply chain to far greater scrutiny. An underground enrichment facility near Fordo operates under strict limits.

If Iran were to race now toward an atomic weapon, the Obama administration and most independent experts say it would need at least a year. The U.S. and its partners — Britain, China, France, Germany and Russia — say that is enough time to discover the effort and intervene. Before the deal was struck, the timeframe for Iran to “break out” toward a bomb was a couple of months.

Iran’s compliance and the expanded breathing room have eliminated for now the threat of a military confrontation.

In the presidential campaign, discussion about the Iran deal focuses largely on the implications of the agreement and today’s limited U.S.-Iranian cooperation, no longer on whether to attack Iran. Presumptive Democratic candidate Hillary Clinton backs the deal; GOP rival Donald Trump says he’ll “renegotiate.”

The same is true abroad. Israel’s leaders still fiercely oppose the deal, but speak little of airstrikes or military intervention.

“It’ll be left to history to see if Iran will modernize,” a conciliatory Israeli Prime Minister Benjamin Netanyahu said as he met President Barack Obama in November, only months after asking Congress to block the deal.

The situation is uneasy in Iran. An election next year means President Hassan Rouhani and his pro-deal government could be replaced. Even if he wins — no Iranian president has lost a re-election bid since the 1979 Islamic Revolution — he could face a backlash from hardliners who seek confrontation with the United States. Like in the U.S., a significant part of Iran’s establishment opposes the nuclear pact.

Rouhani is under pressure to show his people the benefits of the agreement.

Ayatollah Ali Khamenei, Iran’s supreme leader, has said his country “will set fire to the deal,” if the U.S. breaks it first.

After announcing in January that it would buy more than 100 planes from France-based Airbus, Iran has struggled to attract big investments. Many multinational banks and companies are fearful of U.S. prosecution or fines.

June’s Boeing announcement, involving dozens of planes and worth as much as $25 billion, could open the floodgates — if it survives challenges from many of the same Republicans and Democrats who opposed last year’s nuclear deal. Last week, the House passed two measures that would block the sale. The Senate hasn’t acted yet; if it does, Obama would likely veto the bill.

The nuclear accord freed up $100 billion in Iranian assets that were frozen overseas. About half has covered long-standing debts to countries such as China, U.S. officials believe. Iran kept much of the rest abroad to pay for imports, avoid inflation and other reasons; it has brought home less than $20 billion, they say.

“Iran’s macroeconomic indicators are actually looking good,” said Mark Dubowitz, an Iran sanctions expert. Its economy is forecast to grow at a healthy 3.7 percent this year, he said, after shrinking by more than 6 percent before Rouhani’s election and a 2013 interim nuclear deal. Inflation is below 10 percent, down from unofficial rates as high as 80 percent a few years ago. Oil production is up hundreds of thousands of barrels a day.

But Iranian threats to renege on the deal have the Obama administration on the defensive. It sees Rouhani’s success as critical to the accord’s survival. To that end, Kerry has lobbied European banks to make greater investments in Iran and U.S. officials even have explored softening financial restrictions on Iran. Such considerations haven’t gone over well with Republican critics.

Obama’s Iran outreach is “a textbook example of the failure of appeasement,” House Speaker Paul Ryan, R-Wis., wrote in a 23-page national security agenda published last month. He proposed tougher sanctions on Iran and a return to America’s pre-deal posture of keeping “all options on the table — including military force — to stop Iran from obtaining a nuclear weapon.”

The U.S. bragged after the deal that it secured two last-minute concessions: Prolonging a U.N. ban on Iranian missile development by eight years. Tehran quickly flaunted the restriction, testing missiles capable of reaching Tel Aviv and bearing “Death to Israel” lettering. It has suffered few repercussions.

During nuclear negotiations, diplomats took great pains to keep the missile issue, terrorism and the region’s conflicts separate. But tensions on any of these fronts make it harder for Kerry to lobby or for the U.S. to approve the Boeing deal. It also could interfere with the routine work of U.S. and Iranian officials to hash out nuclear differences as they arise.

Administration officials say the pressures on the nuclear deal make it that much more valuable. Iranian ballistic missiles would be more worrisome if carrying nuclear warheads, the argument goes. Syria’s bloody quagmire would be even harder to end if a nuclear-armed Iran were added to the equation.

“Measured by whether the agreement has prevented Iran from developing or obtaining a nuclear weapon, this deal has so far been successful,” said Sen. Chris Coons, a fence-sitting Democrat a year ago who ultimately backed the accord. Still, he said the missile program in particular showed Iran’s “continued hostile intent and a continued desire to play bigger role as a security threat.”

He outlined several potential paths forward, all with inherent dangers: a “routinization” process in which the world loses focus on Iran’s nuclear activity; renegotiation, potentially tearing the deal apart; a “death spiral” of provocations giving one side the pretext to pull out. He dubs a fourth possibility the “time bomb,” which sees Iran upholding the agreement through its duration only to ramp up nuclear activity when restrictions begin disappearing after eight years.

“The clock is steadily ticking — one year down, seven more to go,” Levite said.