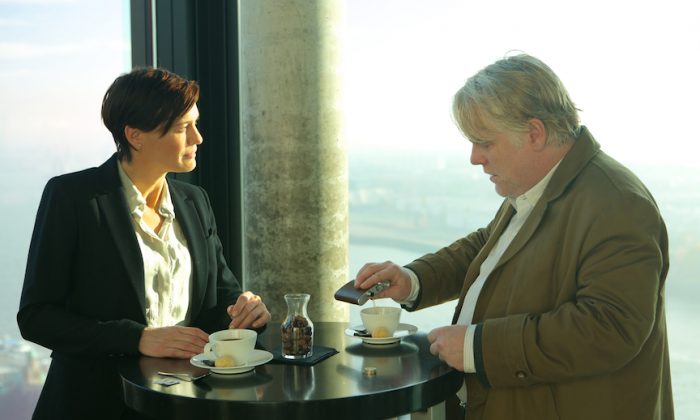 Robin Wright as a CIA agent and Philip Seymour Hoffman as a German intelligence officer in “A Most Wanted Man.” (Roadside Attractions)
Entertainment

‘A Most Wanted Man’: A Spy Movie With All the Fun Stuff Deleted

Not flashy James Bond, nor gritty Jason Bourne, “A Most Wanted Man” is about workaday, no-frills, spy work.

War fighters and law enforcement personnel describe their work as long periods of boredom punctuated by moments of sheer terror. Which goes for the majority of spy work as well. Also for watching this movie. Minus the moments of terror.

Long periods of boredom produce sleeping. That’s why movies focus on moments of terror. “A Most Wanted Man” focuses on the boredom.

Mohamed Atta masterminded the 9/11 hijacking while living in Hamburg, Germany. Therefore, many agencies keep an eye on the area. They don’t necessarily get along.

Philip Seymour Hoffman is Gunther, a seasoned German counterterrorist intel officer stationed in Hamburg. A weary old spy, he drinks, chain-smokes, and heads up a covert crew of antiterrorist operatives tasked with spying on Muslims.

He annoys his bosses in Berlin, and frustrates the CIA, represented by Martha Sullivan (Robin Wright in a short dark wig.)

Now, it must be stated, this movie has a lot of moving parts to keep track of. The problem is, no part contains the requisite tension to keep one focused. So bear with me.

So Gunther’s after Abdullah, a philanthropist who gives to Islamic charity. But it’s been discovered that not insignificant portions of his goodwill grain shipments somehow disappear off barges. What is that missing grain funding?

He’s due an enormous inheritance from his dead dad (whom he hates). The money’s sitting in a German bank—Issa wants to cash in. Gunther thinks he’s got a motive for doing bad things.

Gunther’s crew nabs Issa’s banker (Willem Dafoe) as well as his lefty lawyer (Rachel McAdams). He plays them in a long con, using Issa as bait. As one of the characters says, use the minnow to trap the barracuda to trap the shark.

But Berlin and the CIA are getting restless … got all that? Or did you sleep?

Hoffman, Dafoe, and McAdams all try German accents. Hoffman wins by a nose, but none of it is good.

“A Most Wanted Man” is kind of a Deutsche “Homeland” with a somewhat laid-back, schlubby, older male spy instead of a vivacious blonde female with a stare of extreme fixity and an eternally trembling upper lip.

And there’s no romance, not enough bang for your buck, and too much phlegmatic, muted, audiovisual drabness. It’s all quiet meetings and conversations.

That said, there’s one hugely belated, Philip Seymour Hoffman-generated moment of (what would normally be) tension resolution at the movie’s end. However, you’re ultimately not sure if the feeling of relief comes from that moment, or the realization that you can now exit the theater.