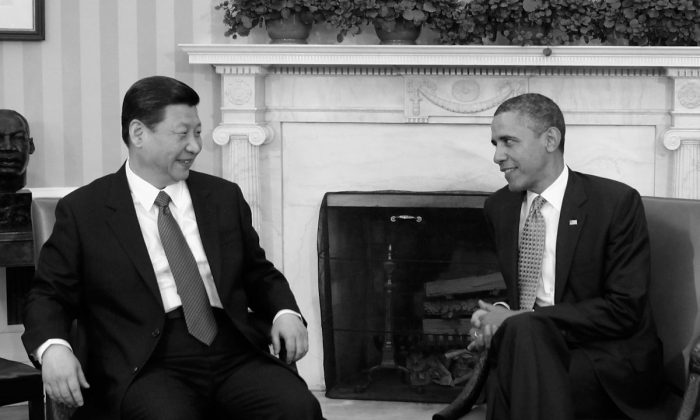 A Look Inside the Obama-Xi Summit

What the two leaders will say to one another

The Chinese regime’s new leader, Xi Jinping, will meet with U.S. President Barack Obama on June 7 and 8 at the estate of Walter and Leonore Annenberg in southern California. The U.S. summit follows upon Xi’s state visits to Trinidad and Tobago, Costa Rica, and Mexico.

This is Xi’s second diplomatic trip to developing countries. Soon after he became the head of state of People’s Republic of China in March, he visited the African countries of Tanzania, South Africa, and the Republic of the Congo.

Xi’s choices for his early state visits remind people of Mao’s “Three Worlds Theory,” which identifies the developing countries as friends of China in the struggle with the so-called hegemonism represented by the United States and the former Soviet Union. The theory still works for Xi, except it is no longer just ideological but is more materialistic, with strong economic motives.

His first trip abroad as head of state was to Russia. To Xi, Russia is a still a semi-communist country without a cold war against China and serves as a big power counterbalancing the West.

Xi’s several itineraries send a strong signal that China is going to act as an independent super power, and the relationship with United States is not his priority. In reality, Xi thinks the United States is asking for too much from China.

On the other hand, the White House has high expectations for the upcoming summit. Unlike his predecessors, Jiang Zemin and Hu Jintao, Xi Jinping has held the paramount power from day one. He simultaneously assumed the titles of president of China, secretary general of the Chinese Communist Party, and chairman of China’s Central Military Commission.

At the Annenberg estate, conversations like the following will take place.

Xi Jinping: Not a problem [big smile], Mr. President. China has always been committed to the peace of the Korean Peninsula. However, we believe the only way to solve the problem is through diplomacy and dialogue. Let us get North Korea back to the six-party talks again. We love talking.

Mr. Obama: Mr. President, I thank you on behalf of the American people.

Great. The six-party talks started in 2003 when North Korea withdrew from the Nuclear Non-Proliferation Treaty (NPT). Rounds and rounds of talks since then have produced nothing but increased North Korean nuclear capabilities and threats.

Most recently, North Korea launched a short-range missile off its east coast. In a report recently submitted to the U.S. Congress, the Pentagon says that North Korea is moving closer to developing a nuke that can hit the United States.

Everyone knows the People’s Republic of China supports North Korea in almost every aspect. Without the PRC’s support, North Korea cannot even sustain itself, let alone develop nuclear weapons.

The PRC benefits from North Korea acting as a troublemaker, which distracts U.S. attention and resources and acts as a buffer to U.S influence in East Asia. In essence, the PRC has directly or indirectly partnered with North Korea in the nuclear weapons program.

If the PRC wants change in North Korea, it doesn’t need to be a member of the party of six. It alone can persuade and force North Korea to discontinue its nuclear weapons program.

Of course, the PRC won’t do it. Beijing enjoys the perception of “helping” the United States to solve the problem by “talking.” In doing so, the PRC gains leverage in other aspects of the relationship with the United States.

The more talking, the better. North Korea wins time to develop nuclear weapons, and the PRC has more bargaining power with the United States.

The Chinese people see the whole situation as very funny: America, the PRC’s ultimate enemy, takes the PRC so seriously in asking for help in stopping the North Korean nuclear weapons program, even as the Chinese people know the PRC regards North Korea as a brother bound by flesh and blood sacrifices.

In this whole nuclear blackmail business, the PRC and North Korea are masters at playing good cop and bad cop. If communism is evil, how can one change it through talking?

Mr. Obama: President Xi, could you please be nice to your neighboring countries and not be so aggressive regarding the disputed islands?

Mr. Xi (looking serious): Well, China always loves peace, but our ownership of those islands is non-negotiable. I hope America will stay out of it. These are matters between China and those related countries.

Mr. Obama: Well, since we have responsibility to protect them, we are very concerned. I trust China will make sensible decisions in these disputes.

Because a kind of hyper-nationalism has been cultivated in the Chinese people by the Communist Party, many of the Chinese people will give Xi a thumbs up for what they have been taught is a strong stand on issues of China’s territorial integrality.

Xi himself feels good about being patriotic. Let us not forget he was raised by the Communist Party to be its leader. But the real question is why these tiny islands, which have been disputed for decades, have suddenly become such a hot and significant issue.

When internal instability in China is on the verge of going out of control, the Chinese regime will exploit nationalistic feelings and shift the people’s focus from the internal crisis to the external crisis.

Nothing is more convenient than to start making noises about conflicts with those “small countries,” and thanks to the help of the West, the United States in particular, the PRC is now an economic and military super power.

The PRC is at the tipping point. Last year, the PRC’s budget for maintaining internal stability surpassed its defense budget.

The PRC does not necessarily want to have a war with the countries around the South China Sea, but it needs to stoke a constant crisis there. As long as the PRC faces international conflicts, all internal problems have to stay quiet.

Of course, playing with fire is dangerous, but the regime has no choice.

Mr. Obama: President Xi, could you please ask your military Internet forces to stop hacking our government, media, industrial, and military networks? It has really caused a lot of trouble for me and makes me look bad as a president.

Mr. Xi (looking offended): Mr. President, this is a baseless accusation. Do not listen to those reports made by people with ill motives. Our People’s Liberation Army has never and will never do things like this. I do not want to waste our precious time here together. It is really important for us to take this opportunity to build up a good personal relationship.

Mr. Obama: Yep, you are right. Once we are friends, nothing else really matters.

Mr. Xi: Anything else, Mr. President? [Xi looks at his watch.]

Mr. Xi (big smile): Not really, thank you! You did just fine. I look forward to our future collaboration, even, [Xi lowers his voice] after you leave office.

Mr. Obama: Mr. President, you are a great leader of China!

Michael Young, a Chinese-American writer based in Washington, D.C., writes on China and the Sino-U.S. relationship.