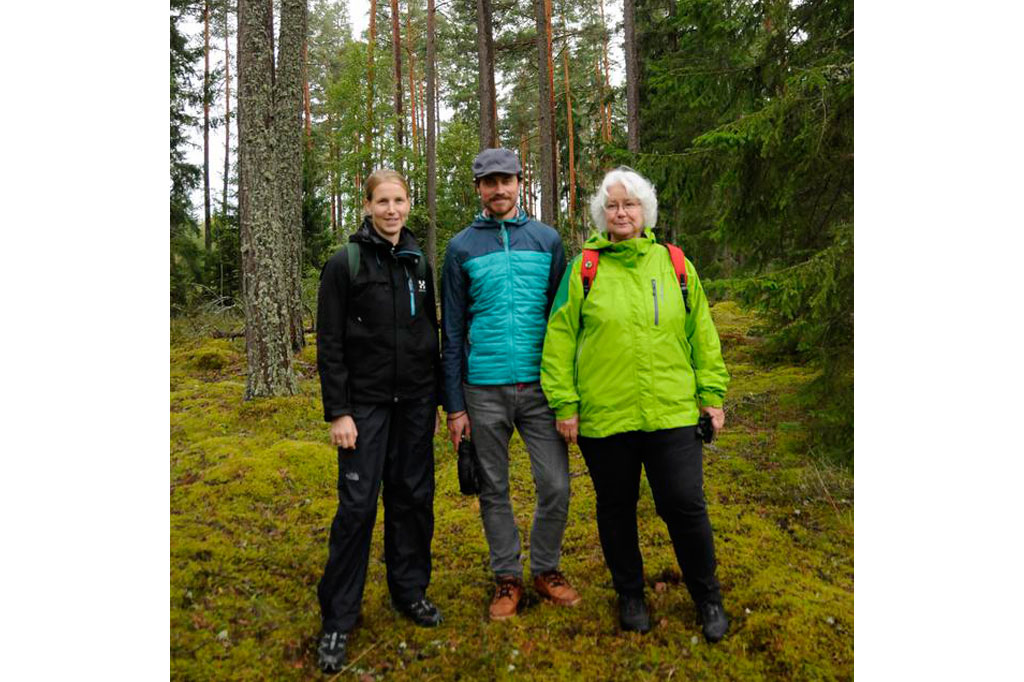 (L-R) Eva-Maria Nordström, Jonathan Stoltz and Ann Dolling. They carried out the research project about how spending time in the forest affects people with stress-related illnesses at the Swedish University of Agricultural Sciences. (Ulrika Lagerlöf/Skogssällskapet)
Health

STOCKHOLM, Sweden—Spending time in the forest makes us feel better and helps recovery from stress-related illness, according to a study by scientists at the Swedish University of Agricultural Sciences (SLU). The best feel-good forests have tall, old trees.

The study shows that the forest has a positive effect on stress-related illnesses, and contributes to a better recovery. Research shows that there is a way to calculate a forest’s specific rehabilitation value, and how much it would would cost for the owner to adapt it.

“Our intention has been to investigate whether spending time in a forest environment can provide restorative effects, and accelerate recovery in patients with chronic fatigue syndrome,” Ann Dolling and Eva-Maria Nordström from SLU told the Epoch Times . “We have also studied which forest environments are perceived as rehabilitating.”

Their research project included people who had been referred to a stress clinic for chronic fatigue syndrome. Half of the participants spent time in one of eight different forest environments twice a week for a period of three months, while the rest of the participants comprised the control group. All participants were then given a nine-month group rehabilitation program with cognitive behavioral therapy (CBT).

Results showed that the open forest environments drew the most visitors, and forests next to lakes were visited most often. Space, view, and a peaceful atmosphere were important aspects for a positive experience, and mental wellbeing increased of those who visited the forest.

“There was a sense of peace and quietness in the forest, of no demands, which gave [people] a sense of freedom,” Dolling and Nordström explained. “Recovery from chronic fatigue syndrome improved in both the forest group and the control group after undergoing cognitive rehabilitation. Our conclusion is that the forest has a positive effect, but it is not enough in itself to rehabilitate from chronic fatigue syndrome. The forest visits has to be combined with cognitive rehabilitation.”

The study also found that the age and height of the trees, and the density of the forest are of great importance when it comes to rehabilitation potential. The trees need to be older than 70 years old, and taller than 16 meter (52 feet) to be beneficial to our health.

Eva-Maria Nordström has performed different tests on a planning tool called Eureka, to figure out what the cost would be to adapt the forest to rehabilitation purposes. Results show that standard management is enough to keep the forests that can be used for rehabilitation, with only a small decrease of the present value.

“What you need to do both to preserve and to create good rehabilitation forests, while the forests are being managed for timber production, is to allow the forest to remain longer than normal, and getting older before it is felled. The density can also be affected by clearing and thinning it in ways that the forest will not become too tight,” Dolling and Nordström added.

The study concluded that it is possible to preserve 6 to 18 % of Sweden’s forests as rehabilitation forests with an economic loss of only 0.1 to 1.6% of the current value.

A fully rehabilitation-adapted management where the trees are allowed to grow for longer periods, and forests are kept less dense might allow a greater amount of rehabilitation forests, but it would also increase the economic loss.