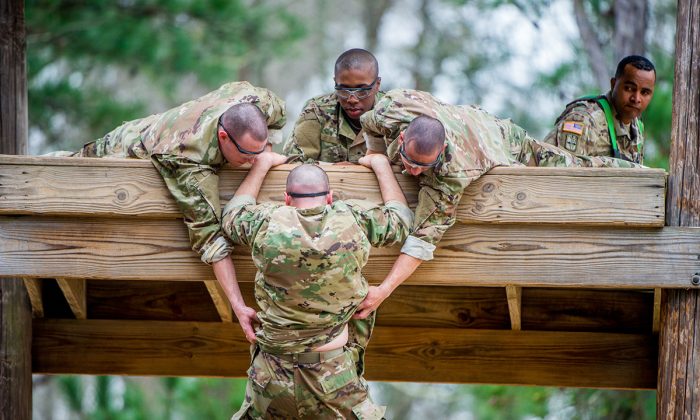 A ‘Battle Buddy’ Can Keep You Going and Help You Succeed

I met Cliff Patterson in 1991 when I was going through the United States Army Ranger School. As ranger buddies, we shared some crazy times, some hard times, and some rough times. We were two very different guys. He was from Washington, D.C., grew up in the city. I was a country boy. I don’t think he was crazy about having my scrawny redneck self as his ranger buddy, but it all worked out.

We couldn’t have been more different, yet we became brothers. A lot of it had to do with the adversity we went through together. We were always checking in with each other. No food. No sleep. Lots of stress. We leaned on each other to get through the course. When one of us was feeling bad, the other would be feeling okay. When one of us was out of food, the other one would have a little bit of food left in their MRE ration pack to spare. That’s just how it went over and over, day in, day out, taking care of each other. We eventually got each other through that course and went on to be great friends.

We lost Cliff in the Pentagon on Sept. 11, 2001. Cliff taught me a lot through the years, but the importance of battle buddies and ‘getting out of your own way’ are what still sticks with me now.

Yeah, he was my ranger buddy, but in other units, they call that one person who looks out for you and you look out for them, your battle buddy. It’s the same thing really. Having a battle buddy serves a range of purposes both in peacetime and in combat. You always check in on your battle buddy. That way, no one gets left behind.

There are so many lessons from the military that we can share with those of you in the civilian community who are leading every day, doing big work, and the battle buddy concept is one of them. As I travel around the country working with civilian leaders, what I see consistently is that so many are isolated and stuck in their own heads.

They feel, in many ways, like they’re struggling uphill. Maybe they feel they’re not good enough to accomplish what it is that’s been put in front of them. They’re wondering if they can accomplish what they want to achieve. In many cases, leaders today in the civilian world feel cut-off from everything around them.

Those same things happen in the military. Battle buddies help us make that something that we can endure, and even thrive upon.

It works just as well in the civilian world.

This doesn’t mean you have to go into your job on Monday and assign a battle buddy, but apply this concept of checking in with each other. Apply this concept of getting out of your own head and checking in with the person to your left and right and seeing how they’re doing. Just ask them, “How are you doing? How are you feeling? Is everything okay?”

That’s the exact same thing Cliff would do with me all the time with that big smile of his, and it would totally change my world. When I would do that for him or other folks around me, it would pull me out of my own head as well.

Think about this battle buddy concept in your life. Think about the power of checking in with the people in your cubicle, with the people on your team, the people in your association, or your nonprofit. How often are you checking in with your wife or your kid? Just look them in the eye and ask them how they’re doing. Those people closest to us in life, those are our battle buddies. Besides, if we don’t look out for each other, who will?

One of my favorite authors, Steven Pressfield talks about the concept of battle buddies in ancient Sparta in his book Warrior Ethos:

“The greatest counterpoise to fear, the ancients believed, is love, the love of the individual warrior for his brothers and sisters. At Thermopylae on the final morning when the last surviving Spartans knew they were all going to die, they turned to one of their leaders, the warrior, Dienekes, and asked him what thoughts they should hold in their minds in this final hour to keep their courage strong. Dienekes instructed his comrades to fight not in the name of such lofty concepts as patriotism, honor, duty, or glory. ‘Don’t even fight,’ he said, ‘to protect your family or your home. Fight for this alone, the man who stands at your shoulder. He is everything, and everything is contained within him.'”