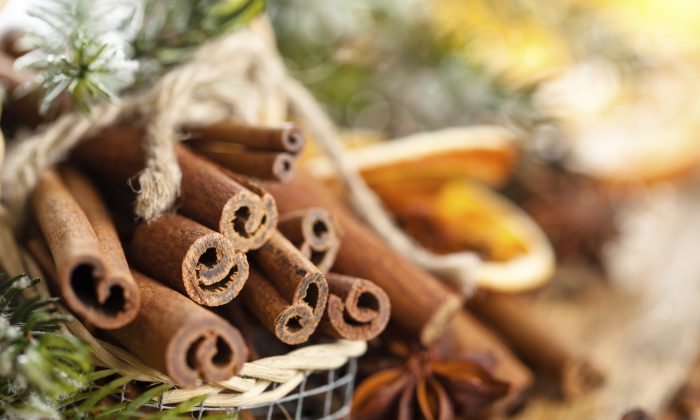 Even when our food choices aren’t the best, herbs and spices do more than just improve taste.  They give any meal a nutrition boost.  And according to a new study they may even reverse the damage from an unhealthy meal.

Researchers from Penn State University cooked up coconut chicken, cheese bread and a dessert biscuit for six men. The subjects were aged 30 to 65 and overweight but otherwise healthy.  On one day the meal was served plain.  On another day researchers added two tablespoons of a blend of nine herbs and spices to the meal.

After each meal the researchers drew blood from the subjects every 30 minutes for four hours.  They found that antioxidant activity in the blood increased 13% after the spicy meal compared to the plain meal.

The spices and herbs also decreased post-meal insulin levels by 21% and triglyceride levels in the blood by as much as 31%.  That in turn could reduce heart disease risk.

The spices used in the Penn State study included garlic powder, rosemary, oregano, cinnamon, cloves, paprika, turmeric, ginger and black pepper.  Besides heart benefits, each of these spices has its own proven health benefits.

Cinnamon normalizes blood sugar levels in type 2 diabetics by improving the ability to respond to insulin. It works by slowing the rate at which the stomach empties after eating.  In one study people ate about a cup of rice pudding with and without a teaspoon of cinnamon. Adding the cinnamon slowed the rate the stomach emptied from 37% to 34.5% and significantly slowed the rise in blood sugar levels.

And a 2003 USDA study found that after 40 days of eating between just 1 and 6 grams of cinnamon (about 2 teaspoons), type 2 diabetics reduced their blood sugar levels by 18-29%.

The Penn State researchers noted that studies associate garlic use with a 38% decrease in the risk of heart problems.  Other studies show aged garlic helps slow the progression of atherosclerosis.

A relative of mint, rosemary has traditionally been used to stimulate the immune system, improve digestion, increase circulation, boost memory and act as an anti-inflammatory.

Animal studies show it acts as an antidepressant, improves type 1 diabetes and even prevents weight gain from a high fat diet.

You may know oregano as the essential herb for Italian cooking especially for tomato sauces and pizza.  But it’s also a powerful medicinal herb. Studies show oregano supports the immune system, and has antifungal, antibacterial and anti-cancer properties. It also increases liver regeneration.

The oil from oregano contains an antiviral compound called carvacrol.  It can significantly reduce viral activity within 15 minutes of exposure.  Look for oregano essential oil standardized to 60-75% carvacrol.

Cloves are rich in eugenol which has been proven to fight environmental toxins and inflammation. Studies show it may also trigger programmed cell death of colon cancer cells.  And the oil is an effective mosquito repellent.

Cloves are also a mild pain killer.  They’ve been proven to be as effective as benzocaine as a topical anesthetic.  That’s why it’s added to over-the-counter sore throat sprays and mouth washes.  It’s also a good addition to your homemade toothpaste.

Paprika is more than a decoration for deviled eggs. It’s made by grinding red chili peppers and is full of vitamin C and carotenoids. The carotenoids from paprika have been shown to combat ulcer-causing H. pylori and help reverse multi-drug resistance.

Use paprika as a rub for meats and fish, or add a teaspoon to hummus for extra spice.

There are now over 600 documented health benefits to eating turmeric.

Researchers in Taiwan just added one more.  They found that just one gram of turmeric at breakfast helps improve the memory of people in the early stages of diabetes.  The turmeric improved working memory over the following six hours.  Other studies have found that turmeric also reduces the risk of dementia.

The Chinese have used ginger for thousands of years to treat stomach upset, diarrhea, and nausea.  Today it is known to relieve nausea due to seasickness, motion sickness, morning sickness and chemotherapy nausea. One study showed ginger root to be more effective for nausea and vomiting during pregnancy than Dramamine, a commonly used over-the-counter and prescription drug for motion sickness.

Ginger also contains anti-oxidant compounds known as gingerols which have powerful anti-inflammatory properties. In addition to reducing muscle pain from exercise, they have been shown to reduce pain and swelling, and improve mobility in those suffering from osteoarthritis and rheumatoid arthritis.  Gingerol have also been found to:

Black pepper improves digestion by signaling the stomach to produce hydrochloric acid. It also helps prevent intestinal gas and acts as a diuretic.  And inhaling the vapors from black pepper has been shown to help people stop smoking.

You may see black pepper added to some of your supplements. That’s because one of its active ingredients piperine enhances the bioavailability of vitamins, minerals and other nutrients.