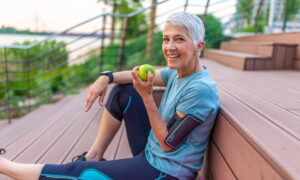 9 Foods You Should Always Eat Organic

While you maybe already be familiar with the Dirty Dozen, it’s a great time of year to make a new commitment to prioritizing organic — and not just food on the list. Time constraints and budget restrictions can often result in grabbing the closest edible item that resembles a healthy snack. While you may think that you’re doing yourself a favour by eating what you think is fresh fruit, you could actually be consuming particles that are hazardous to your health. Next time you’re at the grocery store, consider taking a trip down the organic aisle for the following products.

While Apples usually top of the annual Dirty Dozen, strawberries have now trumped the annual list, ranking as the most heavily contaminated foods. Recent findings have shown that up to 17 different pesticides can be found in a single sampling of a strawberry. Chloropicrin, a chemical linked to cancer and respiratory disease, is often applied to strawberry crops in California – the nation’s leader in strawberry production.

Before you bite into that burger, you may want to think about where your cow is coming from. The antibiotics used to fatten up livestock can have devastating effects on your intestines, causing unpleasant digestive issues. Pesticides from animal feed have also been known to make their way onto your plate. Approved organic meat will also not include additives of any kind.

Many farmers use pumpkins as a clean-up crop since they absorb toxins from the soil. In 2014, California pumpkin farmers dumped close to 14 thousand pounds of Malathion to meet the supply of Halloween pumpkins. Malathion is a suspected endocrine disrupter, cholinesterase inhibiter and a possible carcinogen.

Certified organic dairy products such as milk, cheese, and yogurt come from cows that have only consumed 100% organic feed and are free of any antibiotics or growth hormones. Studies have shown that organic milk contains higher amounts of the cancer-fighting fatty acid, conjugated linoleic acid.

Cherry tomatoes have consistently topped lists when it comes to high pesticide content. The USDA has found that inorganically grown cherry tomatoes can carry residue from up to 69 different harmful pesticides.

A staple of processed foods, nearly 93% of all soy is genetically modified. With GMOs linked to allergies and other health issues, you’ll want to go organic next time you reach for that soy sauce or tofu.

When it comes to pescticide-pummelled fruits, peaches rank in the top five. Even a thorough scrub won’t wash away all of the 62 pesticides found on most peaches, including many known carcinogens. Choosing organic is especially important for this stone fruit since we usually ingest the skin.
Rice

Rice, especially brown rice, can contain high levels of arsenic.  According to the FDA, “Long-term exposure to high levels of arsenic is associated with higher rates of skin, bladder and lung cancers, as well as heart disease.” It’s important to buy organic not just for regular rice, but also rice products such as cereal, crackers, brown rice syrup, and rice noodles.

While you may not think twice about munching down on this theatre-themed snack, chemicals lining microwave popcorn bags have been linked to lung disease and Alzheimer’s. Corn, one of the largest crops in the United States, and the basis for popcorn, has also been found to been found to be primarily genetically modified. Choose organic kernels and pop it yourself. Try sprinkling on spices like turmeric or nutritional yeast instead of butter to make it an even healthier treat.

The good news is there is still plenty of non-organic produce out there that is more than safe to consume. Avocados, onions, pineapples, and cabbage have topped the Clean Fifteen list with very few testing positive for pesticides.

The Dirty Dozen and Clean Fifteen guides can be found here.