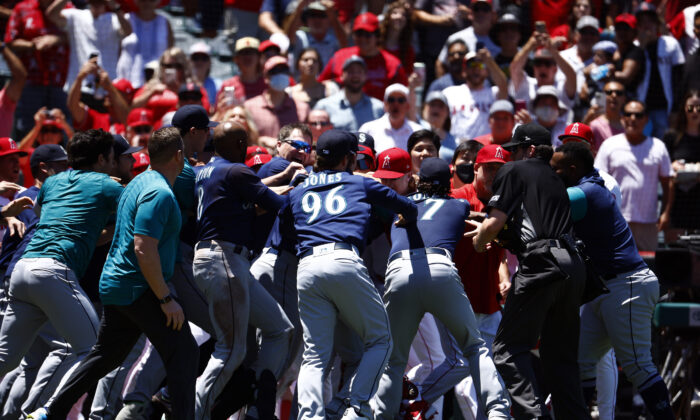 The Seattle Mariners and the Los Angeles Angels clear the benches after Jesse Winker #27 of the Seattle Mariners charged the Angels dugout after being hit by a pitch in the second inning at Angel Stadium in Anaheim, Calif., on June 26, 2022. (Ronald Martinez/Getty Images)
Baseball

The Los Angeles Angels received suspensions resulting from Sunday’s brawl against the Mariners less than two hours before their game versus the Chicago White Sox Monday night at Angel Stadium.

A total of nine Angels players and coaches were suspended by Major League Baseball in varying degrees.

In Sunday’s victory over the Seattle Mariners based on Nevin’s late decision to start Andrew Wantz instead of scheduled starter Jose Suarez, Wantz threw a pitch high behind Seattle’s Julio Rodríguez in the first inning and proceeded to hit Jesse Winker in the second following umpire warnings.

MLB likely considered these actions as retaliatory as Chicago had thrown high near the head of Mike Trout the night before in the tension-filled series, and suspended Wantz for three games.

Two other Angels players were suspended, including relievers Ryan Tepera out for three games, and Raisel Iglesias to miss two games; both are making appeals to the league as they won’t be allowed to be replaced on the active roster.

Angels’ third baseman Anthony Rendon, will be suspended five games when he returns from the injured list next year as he is out for the remainder of the season following wrist surgery—he is prohibited from sitting on the bench for the next seven games.

The brawl may have ignited some camaraderie amongst the struggling Angels as they rallied to score two in the seventh inning Sunday to beat the White Sox 2–1.

The Angels continued Monday with another rally Monday, after giving up the lead in the top of the 7th inning to score two runs in the bottom of the inning to win 4–3. Taylor Ward’s double into right field scored Monte Harrison and Brandon Marsh.

Starter Noah Syndergaard (5–6, 3.86 ERA) ended a four-game slide allowing three runs and six hits in seven innings of work, for his first victory since May 24 against the Texas Rangers; he retired the first nine hitters before Tim Anderson singled leading off the fourth inning.

“Probably one of the best ones [games] I’ve had all year,” said Syndergaard. “Everything’s getting better. I am trusting my delivery instead of just trying to be too fine with things.”

Bench coach Montgomery took over for interim manager Phil Nevin, and stated, “I would like to say it’s just like being in that position when I’m standing there with Phil or anyone else—but it’s not obviously. People are looking to you to be prepared. You have a responsibility to those guys [the players] and want to make sure that they have what they need.”

The Angels have yet to announce a starter for Tuesday’s second-game matchup versus the White Sox, who will start RHP Johnny Cueto (1–4, 3.19 ERA).