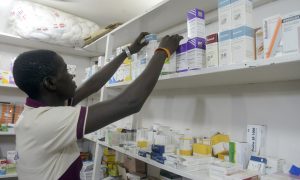 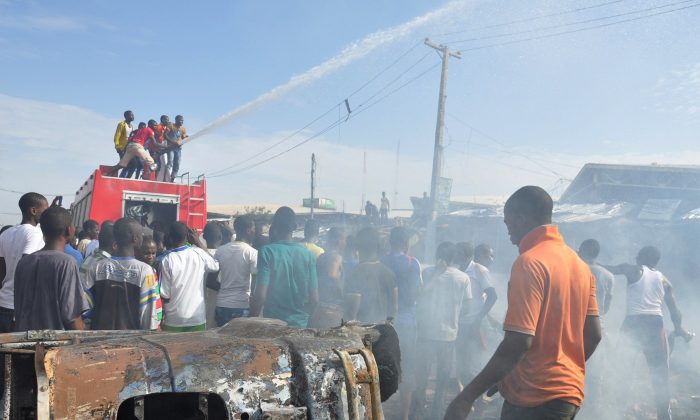 People gather at the scene of a car bomb explosion, at the central market, in Maiduguri, Nigeria. (AP Photo/Jossy Ola File)
Africa

Red Cross chairman Peter Emeka Kathy said about 30 other victims have been hospitalized with severe burns. He said the truck was barreling down the hill when the brakes failed and it ploughed into the bus station at Onitsha, the state capital, before exploding.

Gov. Willie Obiano of Anambra state wept when he visited the scene of Sunday night’s conflagration.

Relatives were visiting morgues on Monday to try and identify missing family members.

“All the persons inside the buses ? I think about 12 buses ? were burnt beyond recognition,” Punch newspaper reported, quoting Anambra state police commissioner Hosea Karma.

Witness Joseph Ugwuanyi wrote on his Facebook page that the blaze raged for an hour before firefighters brought it under control.

“Many of us initially thought there were no casualties, though some people sustained serious injuries while fleeing the scene,” he posted. “However, it was later learnt after the fire subsided that there was a massive carnage of victims who were either caught unawares or those who were already seated in the now-charred buses in the park.”

Nigeria has the highest road accident rate in the world, as well as the largest number of deaths per 10,000 vehicles, according to a report by the Nigerian Building and Road Research Institute. It said road accident deaths are the third leading cause of all deaths in the West African nation that is Africa’s biggest oil producer.

The 2013 report found that potholes were a major cause of accidents, followed by a general lack of vehicle maintenance and chaotic traffic complicated by the number of bicycles, tricycle taxis and animal- and human-drawn carts on highways.