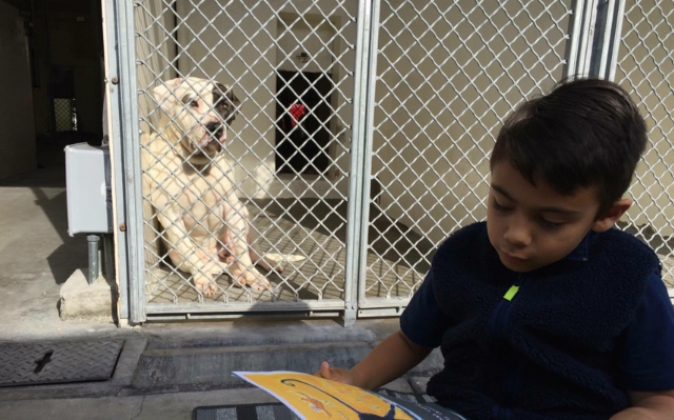 A 6-year-old California boy has taken on a great responsibility at an animal shelter.

According to Jacob’s mom, Katie Tumalan, Jacob’s weekly visits to the shelter have improved his reading skills, but most importantly, his social skills, she told ABC News. While he is helping dogs come out of their shells, he too, is coming out of his.

“My son has always had a big problem with loud noises and a lot of activity around him,” Tumalan of La Habra, California, said. “When he’s there, he looks like he’s pretty focused and he could block a lot of that out. At times he’ll cover his ears, but he stays in tune with the dogs while reading his books, so that’s pretty awesome to me.”

Ferranti told Epoch Times that most of the rescue dogs listens to Jacob, “they respond to him very well,” she said.

She describes Jacob as a calm, quiet, and emotional, traits she says help him succeed in building a relationship with the dogs at the shelter.

Jacob, who gravitates to the non-barking dogs, had a difficult time at the shelter at first.

“He would cover his ears when it would get too loud,” Ferranti said. But now he has adjusted, and is doing very well.

“Reading is calming for him,” Ferranti told Epoch, adding that, Jacob loves to read and always looks forward to going to the shelter.

“It’s not like he’s autistic when he reads to them, just a little boy reading to rescue dogs,” she said.

Ferranti said she and her daughter, Lindsay, are part of Carson Rescue Team, “a group of volunteers who work with the Saving Carson Shelter Dogs Page to find fosters, rescuers, and adopters for Carson Shelter dogs.” They work closely with Carson’s staff three to five times a week “to ensure dogs leave safely,” she said.

Lindsay recently started a group called “Rescue Readers,” where children could come to volunteer and read to the animals at Carson Animal Shelter, and plans to have more “Rescue Readers” this summer, her mother said.

Until then, Jacob will continue his weekly Thursday visits after school—which he has been going for the last six months.