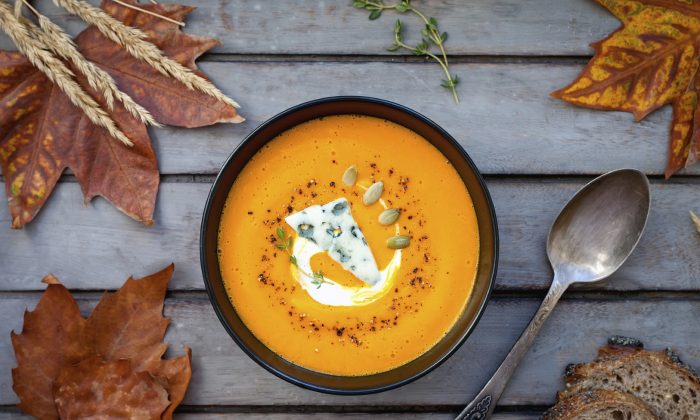 Popularized by the Irish legend, the Jack o’ lantern reminds us each fall that the pumpkin is indeed more than a symbol of Halloween. A member of the Cucurbita family which also includes squash and cucumbers, the pumpkin got its name from the Greek word “pepon” which means “large melon.”

Like most orange colored vegetables and fruit, the pumpkin is rich in carotenoids, potent antioxidants that have been shown to protect against cancer, macular degeneration, and heart disease. One of the carotenes, beta carotene, converts to vitamin A in the liver, contributing to eye health, immunity, and fights the signs of aging. Pumpkin meat also contains fiber and the minerals potassium, iron and zinc. That’s a lot of nutritional value for only 49 calories per cup (cooked).

The pumpkin seed has its own set of nutrients. Also a good source of minerals, including zinc, iron, magnesium, phosphorus, and potassium, only one ounce of ‘pepitas’ supplies about seven grams of protein. Pumpkin seed oil is rich in essential fatty acids (EFAs). Among their many benefits, EFAs help reduce inflammation, protect the brain, and protect cell membranes. The oil is also rich in phytosterols, plant-based fatty acids that contribute to the reduction of blood cholesterol levels. Pumpkin seeds have long been associated with a healthy prostate. The seeds’ zinc and phytosterols may help to shrink an enlarged prostate. For prevention, eat a handful (about 1 ounce) of raw pumpkin seeds three times a week.

A whole pumpkin may be stored at room temperature for up to one month.
Related Coverage

A whole pumpkin may be stored at room temperature for up to one month, but once the Halloween festivities have ended, the ‘meat’ of the pumpkin can be the inspiration for countless recipes.

1. Soup – Steam pumpkin with sweet potatoes and carrots and blend with milk, a milk beverage (such as almond milk) or broth to make a deliciously sweet, carotene-rich soup. Season with cinnamon and nutmeg or all-spice for Thanksgiving, or with cayenne pepper for a warming winter meal.

2. Mash – For a twist on the traditional side dish, using a potato masher or blender, mash pumpkin meat on its own or mixed with potato or sweet potato.

3. Smoothie – If you’ve grown tired of your usual banana-peanut butter smoothies, try a pumpkin smoothie. In a blender, mix half a cup of pumpkin with a cup of almond milk or yogurt, a pinch of cinnamon and nutmeg, and throw in a little stevia, sucanat, honey, agave or brown sugar to add some sweetness. Add ice, blend until smooth, and enjoy!

4. Baking – You can never go wrong with pumpkin pie, but get creative. Sneak pumpkin into muffins, bread, and even cookies.

5. Waffles & Pancakes – Top off a crisp Sunday morning with a tasty pumpkin breakfast. Add some pumpkin to your favorite waffle or pancake recipe and drizzle with honey or maple syrup (and maybe a spoonful of organic vanilla ice cream!).

6. Hummus – Replace the chickpeas in your favorite hummus recipe with two cups of pumpkin.

Of course, we can’t forget about those crunchy pepitas. Dry out the pumpkin seeds, lightly roast in the oven, and season with a light sprinkling of salt for a healthy snack that will keep your hands and mouth busy for hours. For something different, toss with hot sauce, soy sauce, and chili powder.

If you’re really ambitious, make your own pumpkin seed butter. First grind the pumpkin seeds either by hand or in a coffee grinder. Place the ground seeds into a food processor, add some oil and salt and mix until well blended.