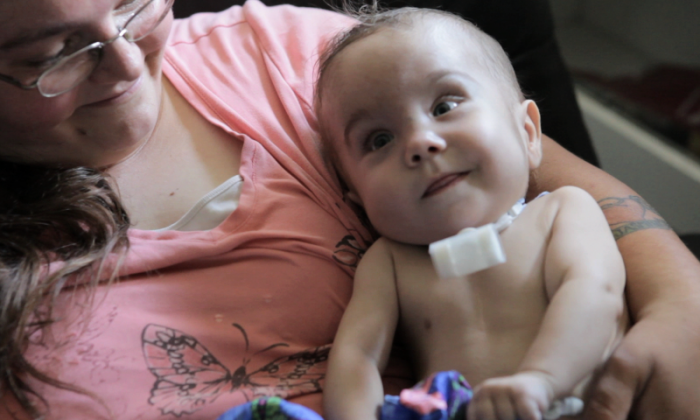 Kaiba pictured with his mother, April. He was able to come off the ventilator after being given a 3D printed implant to open his airways (University of Michigan Health System)
Health

A baby’s life has been saved by innovative U.S. doctors who used 3-D printing to create a vital splint to keep him breathing.

The doctors described their ground-breaking procedure in a report in the New England Journal of Medicine.

Kaiba Gionfriddo began to develop difficulties breathing weeks after being born, his collapsed bronchus blocking the vital flow of air. His condition, known as severe tracheobronchomalacia, is caused by the cartilage that holds the throat open being too soft.

“Quite a few doctors said he had a good chance of not leaving the hospital alive,” says his mother, April Gionfriddo, according to the University of Michigan Health System. “At that point, we were desperate. Anything that would work, we would take it and run with it.”

Kaiba’s doctor’s referred him to Glenn Green at the University of Michigan, who was developing a new, bioresorbable device, together with Scott Hollister, a professor of biomedical engineering and mechanical engineering.

By combining high-resolution images of the baby’s throat, and computer-aided design, the doctors were able to use a 3-D printer to create a tailor-made splint.

The splint, made of a biopolymer called polycaprolactone will be reabsorbed by the body after 3 years.

The doctor’s say that it worked perfectly, and say the case sets a precedent for future 3-D-printed implants.

“It was amazing. As soon as the splint was put in, the lungs started going up and down for the first time and we knew he was going to be OK,” says Green on the university website.

“Severe tracheobronchomalacia has been a condition that has bothered me for years,” says Green. “I’ve seen children die from it. To see this device work, it’s a major accomplishment and offers hope for these children.”

Kaiba, who is now 20 months old, was able to come off his ventilator 21 days after the procedure, and has had no difficulties in breathing since.

“He has not had another episode of turning blue,” says April. “We are so thankful that something could be done for him. It means the world to us.”