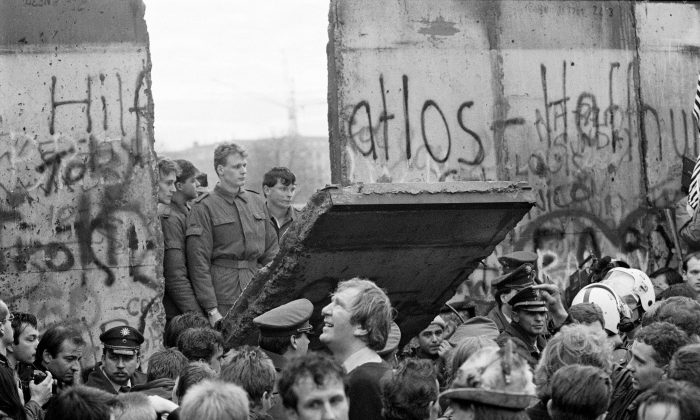 West Berliners crowd in front of the Berlin Wall early Nov. 11, 1989, as they watch East German border guards demolishing a section of the wall in order to open a new crossing point between East and West Berlin, near the Potsdamer Square. (Gerard Malie/AFP/Getty Images)
HK Current Affairs

25 Years Ago: Dismantling the Communist States

Communists, former communists, and their secret police have been the biggest obstacles to economic reforms
By Gary Feuerberg

WASHINGTON—A quarter century ago, people residing in the former Soviet bloc and Yugoslavia began to throw off their communist oppressors, starting with Poland’s Solidarity Movement. About 30 countries went through a painful transition of political, social, and economic reform. Except for three countries (Belarus, Turkmenistan, and Uzbekistan), they transformed into market economies based on private ownership and the rule of law.

Today, we take it for granted that these former communist countries somehow transitioned into market economies and, for the majority, into democracies once the communist yoke was thrown off.

But was it preordained? By no means, according to “The Great Rebirth: Lessons from the Victory of Capitalism over Communism,” a new book published and released last month by the Washington think tank the Peterson Institute for International Economics. Moreover, backsliding and reversals continue to this day.

The contributors to the “The Great Rebirth” led the radical reforms in their respective countries, mostly during the 1990s, but some right up until recent history. The Peterson Institute published the book because it’s important to have a record before this knowledge of what transpired in those early days of transition fades. So, the Institute sponsored a 2-day symposium in May 2014 in Budapest, inviting the old reformers of that time to reflect on past and future reforms. The book encapsulates the ideas discussed at the conference.

Among the 14 scholars/practitioners who contributed chapters to the book was Leszek Balcerowicz, who was Poland’s finance minister and central bank chairman and who published an outstanding reform program in 1989. He was also a capable politician, albeit a reluctant one, as leader of the largest free market party in Poland and as deputy prime minister. Balcerowicz’s economic reform plan had a tremendous impact on reforms adopted outside of Poland too.

Åslund and Djankov, both at the Peterson Institute, are co-editors, and, with Balcerowicz, introduced the book at a forum held at the Institute on Dec. 3.

One can get an idea of the magnitude of economic reform by a comparison with the denationalization in the United Kingdom. Under Prime Minister Margaret Thatcher, three dozen firms were divested. Djankov states, “In contrast, the initial Balcerowicz plan called for nearly 10,000 Polish firms for privatization. In Russia, the [Anatoly] Chubais plan called privatization of more than 150,000 enterprises. In the words of Czech President Klaus, ‘We have no private economy.'”

The economic reformers wholeheartedly agree with Klaus who wrote that he believed, “We took for granted the need for total and unconditional liquidation of the communist political and economic system—we took this idea as our starting point.”

Åslund writes, “The old communist elite was exceedingly hypocritical, claiming obedience to an ideology in which no one believed.”

He writes that most conference participants favored lustration, that is, the purging of communist government officials. Where it was adopted in Central and Eastern Europe, the corruption diminished and democracy is strong. The opposite is true for Bulgaria, Romania, and the former Soviet Union, where the “unrelenting communist elite” retarded reforms.

A different approach occurred with Bulgaria. The Communist Party in Bulgaria renamed itself socialist and came to power several times in 1994, 2005, and in 2013—a feat not equaled by any other Eastern European country. Consequently, the transition in Bulgaria was adversely affected by the reversals of reforms when the former communists won elections, according to Djankov.

Of special importance to reform was the harm caused by the former communist secret police.

“Nontransparent,” “lawless and ruthless,” the secret police have strong tentacles to organized crime networks, which is particularly apparent in Russia and Bulgaria, according to Åslund. Purging them is essential. Åslund writes that other enemies of reform, such as state enterprise managers or the military, have been much less tenacious.

Djankov writes that the former Bulgarian secret police were the best organized institution under communism and took over parts of the economy, major exporting companies, and the banking sector. This takeover facilitated “the involvement of members of the secret police in an organized crime network that traffics drugs and weapons.”

Djankov regards the failure to adopt a lustration law for former secret police in the first years of the Bulgarian transition as a major mistake during the transition period.

The reforms, such as privatization and deregulation, need to be “implemented as quickly as possible and in parallel,” writes Åslund. This is particularly critical during the first year of the transition, what Balcerowicz calls “extraordinary politics.” Balcerowicz notes that the radical policies enabled Poland’s GDP to more than double between 1989 and 2013.

At this critical transition, a battle emerged between reform and “rent seeking” (exploitation of the new economic system for personal gain). “Reform won in Central Europe and the Baltics, whereas rent seeking prevailed in the former Soviet Union,” said Åslund. The news release said that “rapid and bold economic modernization brought greater success than a slower, more incremental approach.”

Speed means that the economists need to have a plan ready before the window of opportunity opens, according to Balcerowicz. “You have to be prepared. You never know when reform becomes possible,” said Åslund at the forum.

The reason is that market reforms require the enactment of many controversial new laws. The will of the people through their elected lawmakers can get the reforms passed and curb corruption.

Russia is a good example of the lack of a parliamentary majority hurting the enactment of economic reform. Not much could get done in Russia where reformers were a minority in the parliament in 1991, according to Åslund. The parliament had been elected in March 1990 before any democratization of parties could happen. “86 percent of its members had been members of the Communist Party,” he states. By 1991 when the impetus for reform was strong, unfortunately, one-third were hardline communists, one-third were democrats, and one-third were flexible.

Four other countries—Armenia, Georgia, Moldova, and Ukraine—fell in the middle. The hope is that they will move toward the rule of law, democracy, human rights, and market economic change and away from corruption and authoritarianism.

“The country that arouses the greatest hope for new market economic reforms is Ukraine,” said Åslund.