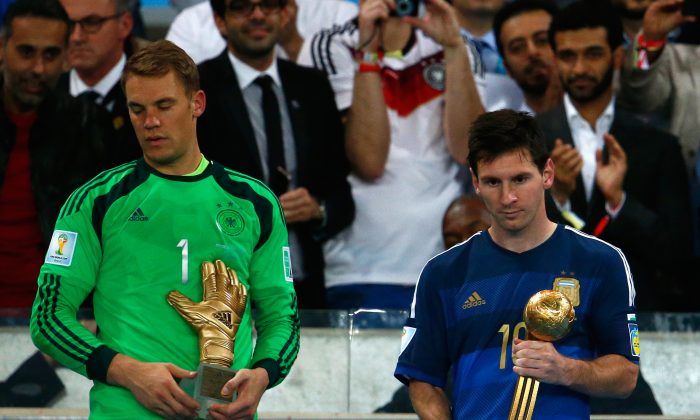 The World Cup 2014 awards have been handed out.

There are four awards in total: the Golden Boot for the top scorer, Golden Ball for best player, Golden Glove for best goalkeeper, and Best Young Player.

Currently, James Rodriguez leads the rest for the Golden Boot with 6 goals, followed by Thomas Mueller with 5 goals, and Neymar and Messi with 4 goals apiece.

RIO DE JANEIRO (AP) — Lionel Messi and Neymar are among the 10 players nominated for the award given to the World Cup’s best player.

Neymar is the only candidate from Brazil among the players selected by FIFA’s technical study group of coaching analysts.

Arjen Robben of the Netherlands and James Rodriquez of Colombia, the tournament’s top scorer with six goals, complete the list.

The winner is selected by the FIFA technical group and announced after the final.

Both goalkeepers in the final are on a three-man shortlist to be named best of the tournament.

Manuel Neuer of Germany and Sergio Romero of Argentina are joined by Costa Rica’s Keylor Navas.

The candidates for best young player are Memphis Depay of the Netherlands, and France pair Paul Pogba and Raphael Varane. Nominees for that award must have been born since Jan. 1, 1993.