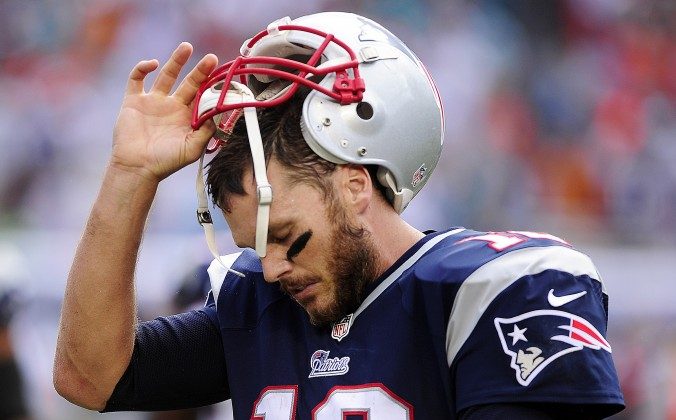 It took just two weeks for the Seattle Seahawks to lose their hold of the top spot in 2014 NFL power rankings.

Unlike Aaron Rodgers and the Green Bay Packers, the San Diego Chargers showed zero fear when hosting the defending Super Bowl champions. Philip Rivers could be as good as he has ever been, leading some to wonder if this will be the year when he and the Super Chargers hoist the Vince Lombardi Trophy in celebration.

Don’t sleep on those ‘Hawks, though. Seattle losing a game on the road only means that the champs are not a perfect side.

32. Oakland Raiders (0-2): Quarterback Derek Carr very much so looks like a rookie, but he is far from atop the list of problems plaguing the Raiders. Oakland is all kinds of awful.

31. New York Giants (0-2): Eli Manning being hung out to dry is a worrisome trend. Five drops from professional wide receivers won’t cut it for any team.

30. Jacksonville Jaguars (0-2): All of you Blake Bortles fans out there: You sure you want the star rookie quarterback playing behind that offensive line?

29. Tampa Bay Buccaneers (0-2): As disappointing as has been any team, the Bucs don’t look all that much better than they were a year ago. Tampa Bay may find themselves drafting a quarterback next spring.

28. Minnesota Vikings (1-1): Running back Adrian Peterson has been cleared to play. Whether or not he should take the field on Sunday, however, remains a question.

27. Kansas City Chiefs (0-2): KC looks like a team capable of dropping nine straight games. Last September is a distant memory for the Chiefs.

26. Tennessee Titans (1-1): The Titans from this past Sunday and not from Week 1 are likely the truer representation of the club. Dallas made Tennessee look ordinary.

24. Indianapolis Colts (0-2): Two controversial calls went against Indianapolis on Monday night, and the start to the season for the Colts has been brutal. Nevertheless, 0-2 is 0-2.

23. Washington Redskins (1-1): Some believe the Redskins will be a better side with Kirk Cousins at quarterback. We’re all about to learn if those people are correct.

22. Cleveland Browns (1-1): The city of Cleveland celebrated a rare September Victory Monday. Quarterback Brian Hoyer needs to play a good game and not just be responsible for a few solid drives before I move the Browns up further in NFL power rankings.

21. Pittsburgh Steelers (1-1): Less than a week after they were lucky to escape with a win against the Browns, Pittsburgh was dominated in Baltimore. That game wasn’t even close.

20. St. Louis Rams (1-1): Who is hyped for the Austin Davis era? Maybe the Rams do have a starting quarterback on the roster.

19. New York Jets (1-1): Having a touchdown being taken off of the scoreboard because of a called timeout that technically shouldn’t have been allowed could be the most Jets thing ever.

17. Detroit Lions (1-1): The Lions were humbled in Carolina after beating up on the Giants in Week 1. That loss will hopefully be a reality check for Detroit.

16. Dallas Cowboys (1-1): That’s more like it from the Cowboys. Dallas is much better than what the team showed in Week 1.

15. Atlanta Falcons (1-1): Don’t panic about the Falcons. Cincinnati didn’t lose once at home last season, and the Bengals are very good. Atlanta will be fine.

14. Baltimore Ravens (1-1): Baltimore saved its season with that win against Pittsburgh. The Ravens now have to show that wasn’t a one-off.

13. Arizona Cardinals (2-0): Style points mean only so much in the NFL. The Cardinals are winning, and that is what’s important.

12. Houston Texans (2-0): From worst to first? I’m hesitant to believe, but the Houston defense looks like the real deal.

11. Buffalo Bills (2-0): Nobody circles the wagons like them! The Bills still have a ways to go, though, before they prove they are legitimate contenders.

10. San Francisco 49ers (1-1): What the heck was that, Colin Kaepernick? The Niners gave a win away on Sunday night.

9. Green Bay Packers (1-1): Green Bay was seemingly headed to 0-2 until they turned things around in the second half against the Jets. It’s still early into the season, but that win could prove to be a result that saved the season for the Packers.

8. New England Patriots (1-1): This just in: Tom Brady is still pretty good. Any assumed demise of the Patriots was greatly exaggerated.

7. Chicago Bears (1-1): Yes, the Bears received several gifts on Sunday night. They still made the necessary plays to win at San Fran.

6. San Diego Chargers (1-1): Philip Rivers may very well be the best quarterback in the NFL when he is at his best. Watch out for the Chargers this year; as long as they can avoid an early season swoon, that is.

3. Philadelphia Eagles (2-0): The Eagles are showing that they are not out of games until the final whistle. The NFC East is theirs to lose.

2. Cincinnati Bengals (2-0): Cincy not only deserves to be here in power rankings. The Bengals may be the best overall team in the NFL right now.

1. Denver Broncos (2-0): Kings of NFL power rankings somewhat by default, the Broncos have not looked as other-worldly as they did in 2013. Perhaps this Denver roster will never get to that level.