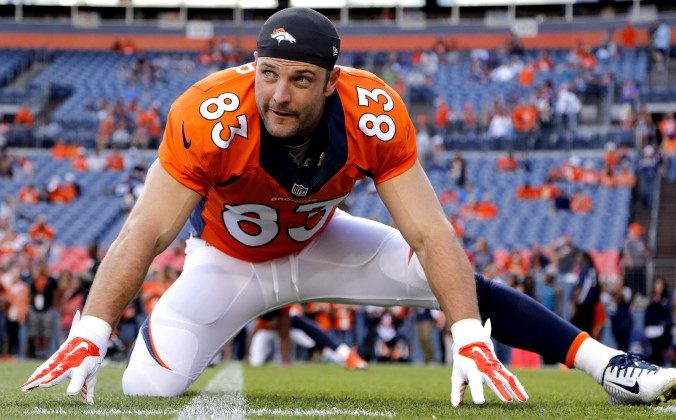 FILE - In this Aug. 23, 2014, file photo, Denver Broncos wide receiver Wes Welker (83) stretches prior to an NFL preseason football game against the Houston Texans in Denver. Player representatives to the union voted to implement HGH testing for the 2014 NFL season, Friday, Sept. 12, 2014. Overall changes are retroactive for players who are suspended under previous policies, and for those in the appeal process. Those players, presumably including Browns receiver Josh Gordon, who is suspended for the season, and Broncos receiver Wes Welker (four games), would be subject to standards of the new policies.(AP Photo/Jack Dempsey, File)
News

While the National Football League continues to be featured in headlines for non-football related issues, on-the-field action will grab attention on Thursday, Sunday and Monday. A rematch involving the two best teams from the 2013-14 season will take place on Sunday afternoon. Two AFC North teams out of Ohio will be looking to show that they are for real, while a New York club that isn’t the Jets will be trying to save its season.

So much for the Buccaneers being improved under Lovie Smith. What was supposed to be a menacing defense of the Bucs has looked rather ordinary, and Tampa Bay enters Thursday Night Football looking for the team’s first win of the season.

Don’t count on it.

The Falcons would be on upset alert if this game was taking place in Florida. Tampa Bay instead has to go north to face off with Atlanta inside of the Georgia Dome. Quarterback Matt Ryan, an early NFL Most Valuable Player candidate in the eyes of some, could be in for a big evening during the first league game of Week 3.

Nobody circles the wagons like the Buffalo Bills! Yes, these Bills are for real, and there are several reasons to believe they can pull off yet another surprise win. The Super Chargers have to fly all the way east to play Buffalo at 1:00 pm ET. Buffalo quarterback E.J. Manuel, the weakest part of his team’s offense, is limiting his mistakes. The defense of the Bills is playing as advertised.

Philip Rivers looked like the best quarterback in the NFL as he dismantled the vaunted defense of the Seattle Seahawks. That was on home soil. Buffalo is rocking due to the news that the Bills will be staying put for the time being, and that has given the franchise a bolstered home-field advantage.

The Austin Davis story is a nice one, but everybody praising the 25-year old reserve St. Louis quarterback needs to take several steps back. Davis has zero touchdowns and an interception in two appearances. He is averaging 213.5 passing yards per game. To his credit, Davis is completing 73.1 percent of his passes.

How long he will be able to manage games has yet to be determined.

The Dallas side from Week 2 is truer to what the 2014 Cowboys will be than what we saw from the team in the season opener. Don’t sleep on the ‘Boys, everybody.

I understand Washington fans being excited about Kirk Cousins getting his chance to lead the offense of the Redskins. Cousins has never had back-to-break great games while in the NFL, and he could be without a top target. Wide receiver DeSean Jackson will want to get revenge on the team that cut him this past offseason, but he is dealing with a shoulder injury that he suffered this past Sunday. Jackson likely won’t be at 100 percent this weekend.

The Eagles are the best team in the NFC East. They have done well to twice rally from behind this season. Philadelphia will be playing in front of a raucous home crowd. Take the hosts.

The Giants are a mess on both sides of the football. They can’t make tackles on punt returns. Fans and analysts are questioning the game plans of the New York coaching staff.

Houston has a great defense, a defense that could obliterate quarterback Eli Manning at MetLife Stadium. Manning is averaging two interceptions per game. The Texans may not have to put many points on the scoreboard to get the job done on Sunday.

The Vikes will be without Adrian Peterson for the foreseeable future. Drew Brees and his offense will be playing at home. Don’t be shocked if the Saints cover the -10.5 spread.

“Remember when the Titans beat up on KC in Week 1 and people thought they were playoff contenders?” – conversations from this coming holiday season.

All kidding/attempts at kidding aside, the Titans were exposed in a 26-10 home loss to Dallas last week. Cincinnati, meanwhile, may be the best team in the conference let alone in the AFC North. Andy Dalton shouldn’t need A.J. Green (toe injury) to take care of business this time around.

Johnny who? Cleveland quarterback Brian Hoyer has been both shaky and inconsistent over the past eight quarters, but not even the biggest of Johnny Manziel fans can deny what Hoyer achieved on the final drive of last Sunday’s game against the Saints. Hoyer converted on a fourth-down, he put the Browns in field goal range with pinpoint passes, and he has left no questions about who is the team’s starting quarterback for the now.

The Ravens did well to get up for a rivalry showdown versus the Pittsburgh Steelers a Thursday ago. That was in front of a home crowd, though. Baltimore experiencing a letdown seems logical.