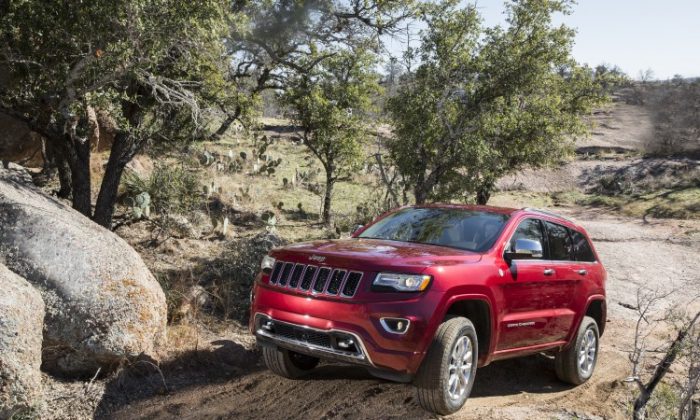 “With the new Jeep Grand Cherokee, we have taken the industry’s most highly acclaimed SUV and elevated it to an even higher level. Jeep has proudly separated Grand Cherokee even further from the competition,” said Mike Manly, president and CEO-Jeep Brands Chrysler Group LLC.

There are a lot of things to like about the 2014 Cherokee, but what please me most is that it will be built in Detroit at the 3 million square foot Jefferson North Assembly Plant. The Cherokee has been built there since its inception in 1992.

But because Jeep expects high demand for the 2014 model, a third crew of 1,100 workers was added at the plant late last year—all good-paying jobs for the American economy and our neighbor to the north. The Jeep Grand Cherokee has produced nearly 5 million units in the last 15 years continuing to make a fine, remarkable SUV in several models.

The 2014 Cherokee will be available in Laredo, Limited, Overland, and Summit models. There will also be an over-the-top SRT model featuring the 6.4L Hemi V-8 which puts out 470 hp, but not much detail has been provided.

For three days in the Hill Country around Austin, Texas, I got to drive all the models and all the engines. I preferred the MultiJet II diesel V-6 because it produces low CO2 emissions, plus it uses common rail fuel injections and has select catalyst reduction.

The diesel provides a smooth and quiet ride and an abundance of power from under the hood. It produces a class-leading 240 hp and massive 420 lb.-ft. of torque. The 3.0-liter Eco Diesel is capable of towing 7,400 pounds—more than any competitor V-6-equipped SUV. And there is a 30 percent increase in fuel economy and nearly 62 percent increase in torque versus the Penstar V-6 engine.

Although gentle as a lamb to drive, the Cherokee has the durability and stability of a camel, achieving 22/mpg/city and 30/mpg/hwy and traveling 730 miles before needing a sip to drink.

All three Jeep Grand Cherokee engines are now attached to a new 8-speed automatic transmission, which provides better fuel economy, quicker acceleration, and smooth shifting. Another benefit is a low crawl ratio of 44.1:1 that aids in climbing over or through tough obstacles when equipped with a 2-speed transfer case. This is a 46 percent improvement over the previous model’s crawl ratio.

Outside, the Cherokee is extraordinarily attractive. The deep-tint sunscreen glass helps keeping the sunlight out, and the dual pane panoramic sunroof with power shade allows your vision to expand so your imagination can explore forever.

Inside, the Summit has leather-wrapped e-shift handle, premium silver stakes in rear cargo, and rear open-pore wood bezels. There is air conditioning with automatic dual zone temperature control and radio/driver seat and mirror with memory. Both the front seats and second row seats are heated, while the front seats have 8-way positioning and 8-way driver lumbar.

Cherokee has added several new safety items to a lineup of 60 existing safety features. These include Front Park Assist, Forward Collision Warning with crash mitigation, and Uconnect Access with 911 call and roadside assistance.

The Texas Hill Country was selected as the launch site for the 2014 Jeep Grand Cherokee. For three days journalists from across the United States put the Cherokee through its paces.

The Cherokee was beautiful and handled superbly on the streets of Austin. Whether you were cruising 6th Street, leading the flow of traffic on Interstate 35, or taking a siesta in the oasis parking of the Four Seasons Hotel, you couldn’t help but be proud.

But it was the off-road course that I enjoyed the most. Driving that course in the Summit was one of the most impressive and exhilarating adventures I’ve ever experienced.

We went up the side of a granite mountain so steep that if you got out of the vehicle, you had to hang on to the Jeep to keep from falling down. Reaching the peak, only blue skies and a few wandering clouds could be seen through the front windscreen.

As I waited my turn to seize the summit, a Laredo sat just ahead at the top, shadowed by the distant blue sky. Only one tire, the left rear, was on the ground—the other three were suspended several inches off the ground. Then it was my turn! The Jeep’s heart never faltered, but several times mine rose and rested in my throat.

There was a spotter on the way down. He smiled as I passed him and said, “Come on ahead. You are doing a great job. You have about half an inch to spare.” From the look on my navigator’s face, I wasn’t so sure.

Below the path was nothing but big rocks, gullies, and scrub trees. I came up the mountain in second gear and came down in crawl. Upon reaching the bottom, I felt like I had just attended a camp meeting and wanted to jump up and shout “Hallelujah.”