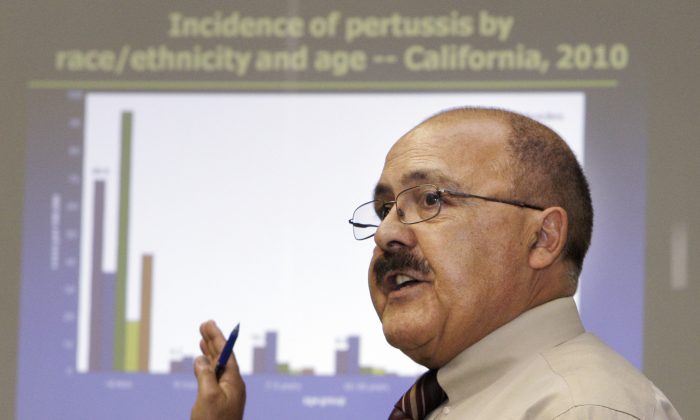 Dr. Juan Ruiz, of the California Department of Public Health, speaks about the 2010 whooping cough outbreak at a news conference by the Centers for Disease Control and Prevention, to publicize a recent, sharp increase in the number of pertussis, or whooping cough, cases reported in California, in Los Angeles on July 15, 2010. (AP Photo/Reed Saxon)
Health

The 2010 whooping cough outbreak in California happened because parents chose not to vaccinate children, according to a new study.

Researchers pinpointed areas in the state where many parents chose not to vaccinate children for “non-medical” reasons, such as personal beliefs.

Most of the whooping cough outbreak happened in the 39 areas pinpointed where a high number of parents chose not to vaccinate children.

The outbreak ended after 10 deaths and 9,120 cases, reported NBC.

“Not vaccinating your child is not a benign decision. It has real health consequences to the individual child and to the community,” study senior author Saad Omer, an associate professor of global health, epidemiology and pediatrics at Emory University in Atlanta, told HealthDay News.

There were other factors at play, such as a newer vaccine, and the cyclical nature of whooping cough.

But researchers wanted to see what role, if any, the parents who chose not to vaccinate their children played.

The overall rate of vaccination was high–90 percent–but in some areas was much lower.

“Our ﬁndings suggest that communities with large numbers of intentionally unvaccinated or undervaccinated persons can lead to pertussis outbreaks,” the researchers wrote in the Sept. 30 issue of the journal Pediatrics.