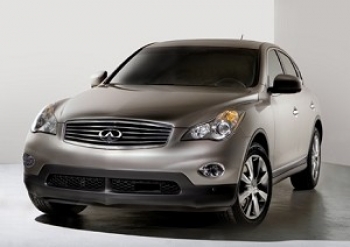 By Durhl Caussey
Print
Northern Arkansas and the Ozarks are so beautiful in the early sunny spring; while southwestern Missouri is bathed in rushing, running water. The great White River is the Mother to numerous lakes like the Taneycomo, Norfolk, and Beaver. These lakes are saddled between Swain Mountain and Long Mountain, and bear witness to the underground marvels of Crystal Cavern and Marvel Cave. It was into this geographic environment that I drove this April on the way to Branson, Missouri, where I was to write a story about the Sight and Sound Theatre that was under construction at the time.

The trip started near the base of the Wichita Mountains in Texas, continued across the mid-section of Oklahoma into northern Arkansas, and finally ended in Branson. The Infiniti EX 35 RWD Journey performed well, as it injected a spirit of enthusiasm along the small and narrow back roads of Arkansas, as well as pure muscle down the toll roads of Oklahoma.

The 3.5-liter DOHC V-6 engine packed 297 horsepower and 253 lb-ft torque. The five-speed automatically shifted down-speed when I got behind a poky, rumbling, log hauler or lazy-paced pack of slow cars. Disc brakes and adaptive shift control made the transition from high speed to slow crawl comfortable and non-intrusive.

The day of the trip to Missouri was sunny and warm. However, a cold, frigid wind escorted me back, flavoured with a dusting of powdered snow and sleet. Weather didn't seem to bother the driver or the car, as Johnny Cash's Ring of Fire CD provided an antidote to the gloomy weather. The Bose premium audio sound was the best partner a traveller could have.

The further south I journeyed, the warmer the temperature became, as gauged by the outside temperature display. The rear foot heater duct was only needed temporarily. The front and rear leather-appointed seats and power folding second row seats gave more space than I needed for luggage, and the smell of leather helped to erase my plebian attitude. The two large front cup holders kept my soda of choice at the ready and added to the freshness of the ride.

The heavy to moderate sleet was whisked away by the speed-sensitive, variable intermittent, front wipers, and rear wiper with washer. Halogen headlights and fog lights, LED taillights, and rear spoiler with red brake light announced my approach and extended a friendly "goodbye" to neighboring cars on the road.

I was never lost, as the navigation package with voice recognition kept me on track and secure in knowing my location, and that help was close at hand if needed.

All in all, it was a great trip, ferried in a high-performing car that cost less than $46,000 and that provided an experience that was priceless.

Durhl Caussey writes a car column read around the world. He may be reached at this paper or dcaussey@sbcglobal.net .