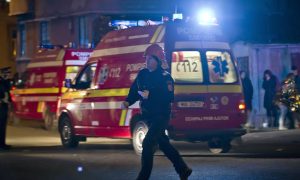 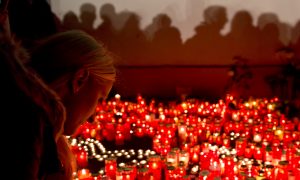 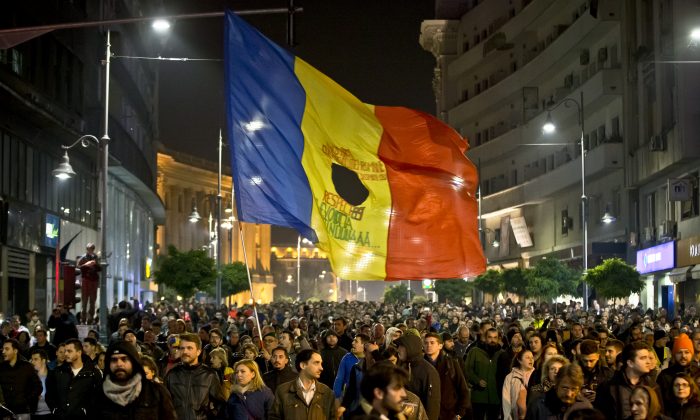 BUCHAREST, Romania—The latest news after the fire at a nightclub in the Romanian capital on Friday evening that killed more than 30 people (all times local).

More than 20,000 protesters marched through the Romanian capital, demanding that the government and local authorities resign in the wake of nightclub fire in which 32 people died.

The protest began Tuesday evening and grew larger as thousands joined the demonstration directed at Prime Minister Victor Ponta, Interior Minister Gabriel Oprea and a district mayor where the Colectiv nightclub was located.

The shouted “Shame on you!” and “Assassins!” and waved Romanian flags. Anger has been brewing for some time in Romania against the government, which many perceive as being corrupt, and last Friday’s fire has added to the discontent.

President Klaus Iohannis wrote on his Facebook page late Tuesday: “I understand what is being asked and what is expected, and they are right, someone has to take political responsibility.” He added, “The next step is for politicians, who cannot ignore this sentiment of revolt.”

Thousands are marching through the Romanian capital to protest against the government following a fire in a Bucharest nightclub that left at least 32 dead.

More than 10,000 marched down the city’s main boulevards and then massed outside the government offices Tuesday evening calling for the resignation of Prime Minister Victor Ponta, Interior Minister Gabriel Oprea and the mayor of the district where the Colectiv nightclub was located.

Anger has been brewing for some time in Romania against the government, which many perceive as being corrupt, and Friday’s fire has added to the discontent. The protesters, who briefly scuffled with ant-riot police, are demanding that authorities punish people deemed responsible for the blaze, the deadliest of its kind in the country’s history.

Witnesses said the fire broke out during a heavy-metal concert in the basement club when a spark ignited foam decor sending panicked people stampeding for the single-door exit. Some 130 remain hospitalized, with dozens in serious or critical condition.

The Romanian Orthodox Church’s patriarch says there is a hostile attitude toward the church and people need to calm down in the wake of a deadly Bucharest nightclub fire.

Daniel, who heads the church, came to the funeral of Claudiu Petre on Tuesday, and entered through the back gate of St. Dumitru. Petre has been lauded as a hero for saving a woman and re-entering the building to try to rescue more people.

The church has been criticized for failing to address a national outpouring of grief after Friday’s nightclub fire in the capital, where at least 32 were killed and dozens of others were hospitalized with serious burns.

The first time priests went to the site of the Colectiv nightclub to say prayers and light candles was on Tuesday, four days after the disaster.

Daniel said that the church is being picked on, but didn’t provide further details. More than 85 percent of Romanians belong to the church.

“There is always hostility toward the church which is very hard to understand,” he said.

A hero of a Bucharest nightclub fire that killed at least 32 people has been buried, drawing hundreds of weeping mourners to the popular photographer and blogger’s funeral, including the patriarch of the Romanian Orthodox Church who had to enter the church by the back gate.

Claudiu Petre, a kind-hearted and bearded rocker, returned to the blaze in the Colectiv nightclub on Friday night to rescue a woman and then went back into the inferno in the basement club. He was never seen alive again.

Colleagues and friends on Tuesday recalled his final moments, as they bade farewell to Petre, who President Klaus Iohannis decorated posthumously for his “bravery, altruism and dedication” in a memorial service lasting more than two hours.

Survivors: Singer at Nightclub Did Not Realize Fire Danger

The inspectorate for emergency situations has appealed to the public to let it know about buildings where fire regulations are not respected.

In a statement Tuesday morning, authorities in the Romanian capital said they wanted the “support of all citizens” in identifying potentially dangerous venues in Bucharest and the suburbs. The appeal came after a fire in a Bucharest nightclub in which more than 30 people died and about 130 remain hospitalized.

“The support is necessary to have a climate of security for citizens,” the statement said.

Fire regulations can be lax in Romanian clubs and restaurants. One club said Monday it was unsafe and was closing down, and two others said they would close temporarily to upgrade fire security measures

Medical authorities say a 28-year-old woman has died of injuries she sustained during a fire at a Bucharest nightclub, raising the death toll to 32.

Gheorghe Popescu, Manager of the St. Pantelimon hospital, said the Andreea Chiriac, who had burns to about 50 percent of her body, died Tuesday morning at the hospital. She was one of five patients in a serious or critical condition at the hospital.

Some 130 people remain hospitalized, of whom about 90 people are in critical or serious condition after fire engulfed the Colectiv nightclub in Bucharest on Friday evening during a heavy-metal rock concert. Witnesses say a spark during a pyrotechnics show ignited foam decor in the basement club.