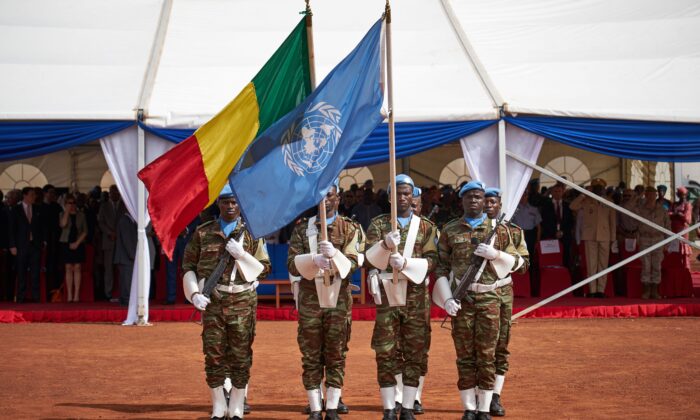 Soldiers hold the UN and Malian flags during the ceremony of Peacekeepers' Day at the operating base of MINUSMA in Bamako, Mali, on May 29, 2018. (Michele Cattani/AFP via Getty Images)
Africa

UNITED NATIONS—Two U.N. peacekeepers were killed Friday when their armored personnel carrier hit an improvised explosive device in central Mali in the sixth incident in less than two weeks targeting the U.N. mission in the West African nation that has faced a decade-long Islamic insurgency.

U.N. spokesman Stephane Dujarric said the device that killed the Egyptian peacekeepers and wounded one other was planted on a road outside the town of Douentza in the Mopti region.

Their APC was escorting a civilian convoy and was on its way from Douentza to Timbuktu when it hit the device, he said.

“The intent is to disrupt the lives of the Malian people, to disrupt transport, to disrupt security,” Dujarric said. “These roads are used by civilians, civilian trucks, civilian buses, but also by the security forces, whether it’s the Malian army or U.N. peacekeepers … (who) have been victims over and over again of improvised explosive devices.”

It was the sixth incident in which a U.N. peacekeeping mission convoy was hit since May 22 and the second fatal attack on a convoy this week, the U.N. spokesman said.

A U.N. peacekeeping convoy was attacked by suspected terrorists in the northern Kidal region on Wednesday and a Jordanian peacekeeper was killed and three other Jordanians were wounded. Dujarric said the supply convoy came under sustained fire for about an hour from attackers who used small arms and rocket launchers.

Mali has been in turmoil since a 2012 uprising prompted mutinous soldiers to overthrow the president. The power vacuum that resulted ultimately led to an Islamic insurgency and a French-led war that ousted the extremists from power in 2013. But insurgents remain active and extremist groups affiliated with al-Qaida and the ISIS terrorist group have moved from the arid north to more populated central Mali since 2015, stoking animosity and violence between ethnic groups in the region.

The U.N. Security Council and U.N. Secretary-General Antonio Guterres strongly condemned Friday’s attack in separate statements and called on Mali’s transitional government to swiftly identify the perpetrators and bring them to justice. They both underlined that attacks on peacekeepers may constitute war crimes.

The secretary-general “pays tribute to the determination and the courage of peacekeepers, who continue to implement their mandates in extremely challenging circumstances in support of the people of Mali,” U.N. spokesman Stephane Dujarric said.

The Security Council stressed that involvement in planning, directing, sponsoring, or conducting attacks against peacekeepers also constitutes a basis for U.N. sanctions.

Council members “expressed their concern about the security situation in Mali and the transnational dimension of the terrorist threat in the Sahel region” and urged full implementation of a 2015 peace agreement “without further delay.”

The U.N. mission says over 255 of its peacekeepers and personnel have died since 2013, making Mali the deadliest of the U.N.’s dozen peacekeeping missions worldwide.

“The word grateful isn’t strong enough to express how we feel towards those member states which continue to provide many peacekeepers around the world,” Dujarric said. “Egyptians, Jordanians, Chadians, and others have given their lives for the people of Mali for the cause of peace and we’re eternally grateful for their continued support.”

The head of the U.N. mission in Mali, El Ghassim Wane, condemned Friday’s attack on the U.N. convoy, saying such attacks can constitute war crimes.

He also condemned an attack Wednesday near Kayes in western Mali by gunmen riding motorcycles against a vehicle marked with the Red Cross emblem that killed a worker for the Dutch Red Cross and the car’s driver.