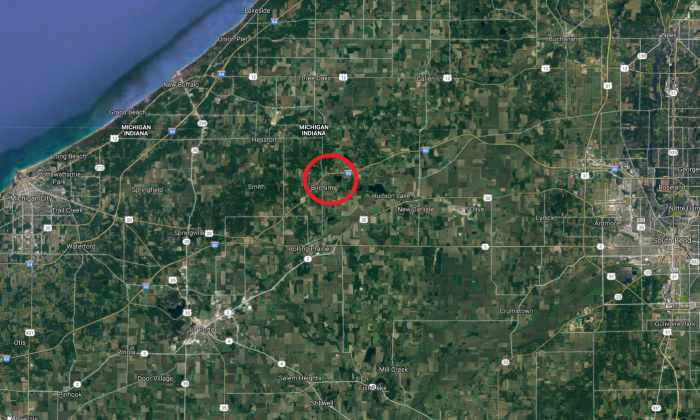 The approximate location of an 18-vehicle pileup on Indiana Toll Road on Dec. 31, 2017. (Screenshot via Google Maps)
Crime and Incidents

Eight semi trucks and 10 cars got entangled in a crash on Indiana Toll Road on Sunday, Dec. 31, according to WNDU, citing Indiana State Police.

The pileup happened just before 3 p.m. at the westbound 58 mile marker near Birchim.

The cause of the crash was a whiteout, according to Clyde Sink, a truck driver from Aurora, Minnesota, who ended up in the midst of the pileup.

“Took the ditch to avoid smashing a car in between and the truck in front of the car,” he wrote on Facebook, posting several images of the scene. He was eventually pulled out of the ditch and spent the night at a Flying J truck stop in Lake Station, about 40 miles from the crash site.

State troopers were diverting traffic at the 72-mile exit at the U.S. 20 bypass. But within about two hours one lane was reopened.

The crash occurred in La Porte County, which was hit by a band of lake-effect snow from Lake Michigan on Sunday. It dumped as much as nine inches, causing slide-offs and minor car crashes, WNDU reported.

Most northern states have endured sub-zero temperatures as the new year approached, with a low of -44 degrees recorded in Hettinger, North Dakota.