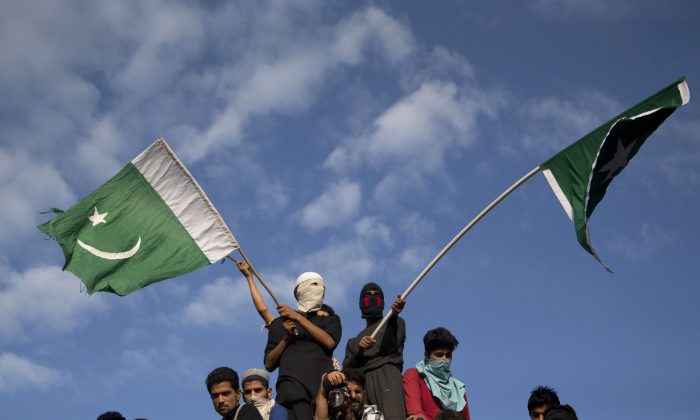 Kashmiri villagers wave Pakistani flags during the funeral procession of Burhan Wani, chief of operations of Indian Kashmir's largest rebel group Hizbul Mujahideen, in Tral, some 24 miles south of Srinagar, Indian controlled Kashmir, on July 9, 2016. Indian troops fired on protesters in Kashmir as tens of thousands of Kashmiris defied a curfew imposed in most parts of the troubled region Saturday and participated in the funeral of the top rebel commander killed by Indian government forces, officials and locals said. (AP Photo/Dar Yasin)
India

SRINAGAR, India—The death toll in Kashmir rose to 16 on Sunday as clashes between Indian troops and protesters continued despite a curfew imposed in the disputed Himalayan region to suppress anti-India anger following the killing of a popular rebel commander.

The dead included 15 civilians killed in two days of clashes between angry, rock-pelting protesters who defied the curfew and Indian troops, a police official said on condition of anonymity because he wasn’t authorized to speak to reporters.

A policeman was killed Sunday after protesters pushed the armored vehicle he was driving into a river during clashes in the southern Anantnag area.

Anti-India protests have been reported from many places across Kashmir, with scores of people reported injured.

Indian troops used live ammunition, pellet guns and tear gas to try and control the angry crowds, police said. More than 100 civilians have so far been injured in the clashes.

Police intelligence chief Shiv M. Sahai said that protesters attacked several police and paramilitary posts in the region. Around 90 government troops were also injured, he said. Thousands of government forces in riot gear have fanned out across towns and villages in Kashmir.

Officials at the region’s main hospital, in the city of Srinagar, said Sunday that they were dealing with a medical emergency as they tried to attend to at least 50 civilians admitted with bullet and pellet injuries, local media reported.

Wani, in his early 20s, had become the iconic face of militancy in Kashmir over the last five years, using social media like Facebook to reach out to young Kashmiri men.

Kashmir is evenly divided between India and Pakistan, but claimed in its entirety by both. Most people in Kashmir have long resented the Indian presence, and support rebel demands for an independent Kashmir or a merging with Pakistan. More than 68,000 people have been killed in the uprising and the subsequent Indian military crackdown.

Indian officials, fearing that the killing could lead to violent protests in the already troubled region, have also indefinitely suspended an annual Hindu pilgrimage to a mountain cave that draws about half a million people each year.

Cellphone services in southern parts of Kashmir remained suspended for a second day and mobile internet services were blocked in the rest of the region to prevent anti-India demonstrators from mobilizing.