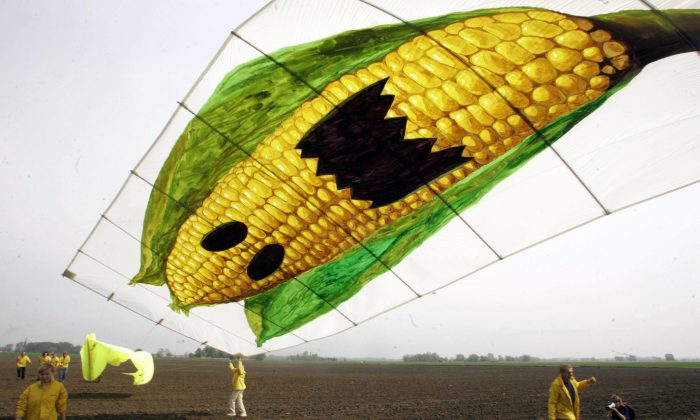 Greenpeace activists fly a kite displaying a giant corn cob to protest against the cultivation of genetically modified maize. According to Greenpeace, the US company Monsanto disseminated transgenic seeds of the type MON810 on the field. (Michael Kappeler/AFP/Getty Images)
Good to Know

15 Things You Should Know About Monsanto

I’m sure you’ve probably heard of Monsanto but just in case you haven’t let’s recap some of the things you should know about this company. Monsanto is a multi-billion dollar company that has branches in 100 different countries dominating the global seed market. But before Monsanto monopolized the food and chemical markets they have a varied history in artificial ingredients, plastics, growth hormones, non-biodegradable materials and even created war weapons. Here are 15 things you should know about Monsanto:

In 1902, Monsanto sold its first product, an artificial sweetener called “Saccharin” to the Coca-Cola Company. By 1905 Monsanto began to make profit by selling vanillin and caffeine. In the 1970’s saccharin fell in popularity when a study revealed that it caused cancer in test rats and mice – causing it be listed on the NIH’s carcinogen list. However, saccharin is still being used in drinks, processed foods, medicines, chewing gum, fruit spreads, toothpaste, and junk food.

In 1944, Monsanto and 15 other companies started manufacturing DDT as an insecticide for killing pests. DDT was used in the civil war to take care of lice, and to curb diseases from transferring to soldiers from mosquitos. Hundreds of thousands U.S. soldiers were issued DDT powder and told to sprinkle it in their sleeping bags. Despite all the claims of Monsanto that DDT was safe, the research in the 1970s confirmed that DDT was toxic and due to public pressure DDT was banned in 1972.  U.S. and International authorities classify DDT as a probable human carcinogen.

During WW2, Monsanto was involved in creation of the first nuclear bomb in what was referred to as the “Manhattan project.” Additionally Army documents have surfaced linking Monsanto to white phosphorus, which has been used against people in the Gaza Strip (most recently), El Salvador, Lebanon, and other countries including in Vietnam during the war. Monsanto’s production of PCBs, DDT and Agent Orange has also played a starring role in various wars throughout the world.

In addition to the Manhattan project Monsanto created chemical weapons that were sprayed on the Vietnamese civilians and American troops during the Vietnam War. “Operation Ranch Hand,” was a campaign where American planes sprayed 72 million liters of Agent Orange during the Vietnam War. The effect: over 1 million (roughly the population of Montana) Vietnamese children, women, and men were exposed to one of the most toxic chemicals on the planet, Dioxin. Over 100,000 American troops were also exposed. Monsanto and Dow Chemicals were the primary suppliers of Agent Orange, however Monsanto was able to produce a stronger version both quicker and cheaper, which is why Monsanto was the key defendant in the lawsuit brought on by Vietnam War veterans. Survivors of Operation Ranch Hand, experienced nausea, rashes, headaches, extreme fatigue, depression, suicidal tendencies, violent rage, cognitive problems, birth defects, peripheral neuropathies (nerve damage), cancer, and body deformities. More than 3 million American troops and their offspring were also the victims of Agent Orange. In 1987 Monsanto had to pay 180 million dollars settlement to the veterans of the Vietnam War.

But Agent Orange didn’t just harm those involved in the war. In 2012, Monsanto settled a lawsuit with thousands of plaintiffs in Nitro, West Virginia for $93 million. Residents claimed they had been poisoned by decades of contamination from cancer-causing chemicals used in the manufacturing of Agent Orange produced in a Monsanto plant.

Yes, you read that correctly. Monsanto even contaminated the “happiest place on earth.” Monsanto was involved in the creation of several Disneyland attractions that were entirely built with non-biodegradable plastic. One of those attractions was called Monsanto’s “house of the future,” an old video of this invention can be seen here. When Disney decided to remove Monsanto attractions, they couldn’t remove the pieces like they had with other plastic attractions. They had to squeeze large intact pieces of the non-biodegradable plastic into a truck and haul it off the property.

Another non-biodegradable disaster created by Monsanto was Polystyrene. Polystyrene production became a focus of Monsanto’s in 1941 and is commonly referred to today as Styrofoam. Polystyrene is a petroleum-based plastic used in everything from packing materials, car parts, and food storage to medical applications. Since Polystyrene is non-biodegradable it has been dubbed the largest environmental waste product on the planet. Polystyrene is also considered the main component of marine debris worldwide. Harvard states “the environmental impacts of polystyrene production in the categories of energy consumption, greenhouse gas effect and total environmental effect ranks second highest, behind aluminum.” Since Polystyrene is made up of styrene and benzene, both neurotoxins, chronic exposure to it has been tied to many health concerns such as depression, headaches, fatigue, kidney failure, and weakness. Polystyrene food containers have been found to leach the toxins when they come into contact with warm food, drinks, alcohol and acidic foods.

Aspartame was once on a Pentagon list of bio warfare chemicals yet was approved by the FDA in 1974. It is currently in over 4,000 products worldwide and is consumed by over 200 million people in the United States alone. What those 200 million consumers don’t know is that Aspartame clinically exacerbates predisposed illnesses and complicates illnesses such as Lupus, Multiple Sclerosis, Parkinson’s, diabetes, and allergies.

By the early 80’s NutraSweet consumers complained of headaches, dizziness, vomiting, nausea, blurred vision, seizures, convulsions and a host of other reactions to aspartame. Despite the fact that complaints about aspartame represent 80-85% of all food complaints registered with the FDA, it is still on grocery shelves.

Polychlorinated biphenyls, also known as PCBs, were one of Monsanto’s earlier successes at profiting off of a known toxic chemical. In the early 1920’s, PCB’s were used as lubricants, cutting oils and hydraulic fluids until scientific evidences showed that PCBs are one of the deadliest carcinogens and chemicals linked to auto-immune system disorder, birth defects, cancer, organ failure and death.

In 1979, the U.S. Congress banned production as it recognized PCBs as a significant environmental toxin and a persistent pollutant. Rather than disposing their stockpile of PCBs in a manner that was least destructive to the environment, and human health, Monsanto dumped their PCBs in an open pit near Anniston Alabama. There they sat, secretly poisoning local residents for 40 years. In 2003, Monsanto was tasked to clean up it’s mess and paid out over $600 million to residents of Anniston, Alabama, who experienced liver disease, neurological disorders and cancer after exposure to PCBs.

But Alabama wasn’t the only casualty. 99% of all PCBs were manufactured in a plant in Sauget, Illinois and currently Illinois has one of the highest rates of immature birth and fetal death and home to two superfund sites. A Superfund site is defined by the EPA as “an uncontrolled or abandoned place where hazardous waste is located, possibly affecting local ecosystems or people.” Although PCBs were banned in 1970s, they still remain in water along Dead Creek in Sauget where Monsanto had its plant for manufacturing PCBs as well as many other locations in the U.S.

Lawsuits and findings about PCB contamination continue today in the U.S. The city of Oakland, California filed a lawsuit that holds Monsanto accountable for allegedly contaminating of the city’s storm water as well as the San Francisco Bay with PCBs. A new Portland State University study revealed oysters native to the Pacific Northwest contain a cocktail of PCBS, glyphosate and pharmaceuticals. PCBs are another example of how Monsanto poisoned families, destroyed neighborhoods, and sullied renewable resources for profit.