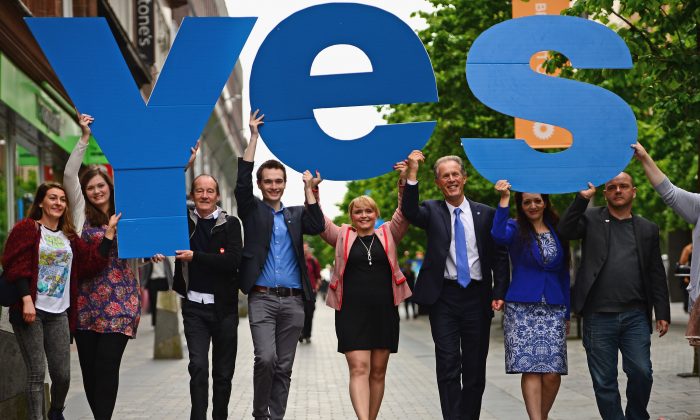 The Yes Scotland team mark the start of the regulated referendum period on May 30th, 2014 in Glasgow, Scotland. (Jeff J Mitchell/Getty Images)
Europe

100-day Countdown to the Battle for Scotland

With less than 100 days to go until Scotland’s Referendum on Independence on September 18th, the Yes Scotland and Better Together camps are heating up their campaigns to win the Scottish people’s votes.

The latest Ipsos Mori poll released on June 1st gives the Better Together No campaign a lead with 54 per cent of the vote and Yes Scotland 36 per cent. This 18 per cent difference represents a closing of the gap in Yes’s favour, as an earlier survey in March by the same company found a 25 per cent difference between the campaigns with No on 57 per cent and Yes on 32 per cent.

Since the 1999 ScotCen’s Scottish Social Attitudes survey, men have consistently taken the lead in supporting an independent Scotland. Recent figures show 38 per cent of men want to break ties with Britain against 27 per cent of women.
With women making up 52 per cent of the Scottish population, which way the one in five female voters who remain undecided will swing may be crucial to the result.

Scottish Nationalist Party (SNP) Deputy First Minister Nicola Sturgeon has said on the BBC’s What Women Want programme that if the pro-independence Yes Scotland can persuade a majority of women, the campaign will win and “crack the referendum”.

Hoping to win more female votes, Sturgeon hosted on Monday, June 9th, the first all-women Scottish Cabinet event in Edinburgh to mark the hundredth day until Scotland goes to the polls. She said to the attending women from 130 organisations across Scotland that a Yes vote would benefit them more than a No vote.

Promising that independence will provide women with free universal childcare for children aged 1-5, equal pay, and fairer welfare benefits, Sturgeon said this would give them more opportunity to go out to work to reach their full potential in whatever field they choose. The SNP claim more women in the workplace would raise an extra £700 million per year in tax revenue, and cover the costs of childcare.

At a Better Together rally in Glasgow to mark the 100-day countdown, campaign leader Labour MP Alistair Darling called for the Scottish people to say “No Thanks” to independence. He said “with 100 days to go, the terms of trade have changed”, with the other pro-Union parties vowing, in the event of a No vote, to give more powers to the Scottish Parliament as part of the UK.

“Now all three of the Scottish parties backing a No vote have put forward broadly similar proposals for further powers,” Darling said. “I want to use these 100 days to plan for Scotland’s positive, possibility-rich future as part of the United Kingdom with substantially enhanced powers for the Scottish Parliament.

“It is a vision that the overwhelming majority of us want. And so when voters go to the polls on September 18th, I want every voter to understand that within the United Kingdom change and progress is coming to Scotland, underpinned by the commitments of all three parties,” he said.

To mark this stage in the countdown both sides have now launched their own 100-day pocket-sized pledge cards.

Yes Scotland’s five reasons for an independent Scotland are:

• The security of having control of Scotland’s vast wealth and resources.
• The job-creating powers we need – an economic policy that puts Scotland first.
• Big savings by not spending money on nuclear weapons, Westminster MPs and Lords.
• The governments we vote for – every time.
• Public services like the NHS protected from Westminster privatisation.

The Better Together campaign’s five reasons to vote no are:

• Best for jobs – one in five Scots employed by UK-wide companies.
• Best for schools and hospitals – more to spend on the services you value
• Best for business – two thirds of Scottish goods and services sold within the UK.
• Best for pensions – better pensions supported by all UK taxpayers.
• Best of both worlds – Scotland, making its own decisions, keeping the pound and backed by the strength and security of the UK.