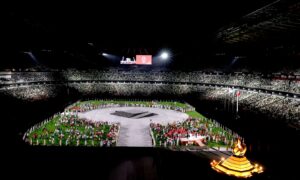 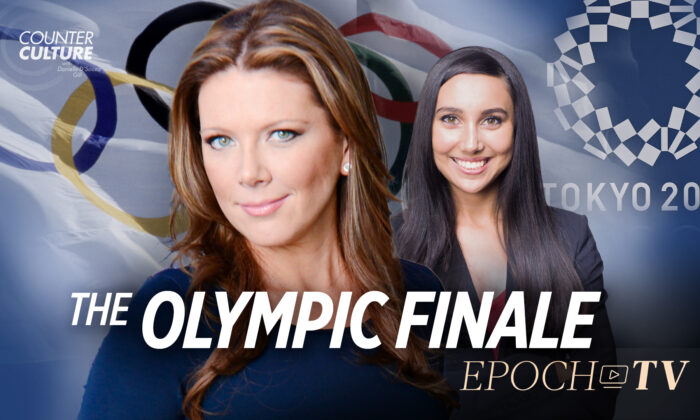 Zeus Would Smite Us

The Olympics happened this summer. Don’t worry if you missed them, most people did, with the Tokyo Olympics losing nearly half the viewers who tuned into the 2016 summer games in Rio de Janeiro.

Pundits are listing all sorts of reasons for this decline in viewership: the significant time difference between the United States and Japan; NBC’s pitiful job relaying to viewers what events were on at what time; an emphasis on driving people to the online Peacock network rather than traditional television; and airing only snippets of events after the fact instead of replaying them in full.

Danielle D’Souza Gill, host of “Counterculture,” thinks there’s another key reason at play, however, namely the politicization of the Olympic Games.

Nothing is untouched by politics in our modern day, and sporting competitions are no exception.

Viewers have been abandoning professional sports in droves over the past few years as athletes take every opportunity to make political statements when fans just want to get away from politics for a while and watch adults play games.

Yet somehow Olympic athletes expected everyday Americans to tune in while they embarrassed themselves and their country by protesting against racial injustice (whatever that means this week) on the world stage. It seems it was more important to virtue signal by self-flagellating over perceived wrongs the United States has committed than it was to win a medal. This, when the United States has led in winning the most medals since the modern Olympics began in 1896.

D’Souza Gill opens “The Olympic Finale” by highlighting some of the winners and some of the losers at the Tokyo Olympics. Anastasija Zolotic won the first gold medal for the United States in taekwondo. Vincent Hancock and Amber English won gold in skeet shooting. The U.S. swimming teams did particularly well, with eight gold medals going to the men’s team overall and three going to the women’s team.

In spite of this, the media focused far more attention on athletes who lost than athletes who won. Gwen Berry’s name has been all over the news for her protest at the U.S. Olympic trials and her plans to protest if she won a medal, even though she eventually came in nearly dead last in the hammer throw. The media has spent much more time talking about her calls for social justice than the magnificent Tamyra Mensah-Stock winning the gold in wrestling. She is the first African American female to win the event, an event that is arguably the most traditional of all the sports given the Greeks’ love for wrestling, but she barely registered a blip with the mainstream media. It’s inexcusable.

Then of course there is Simone Biles and her “stunning and brave” withdrawal from competition due to mental health issues. Her withdrawal completely overshadowed Sunisa “Suni” Lee becoming the first Asian American to win gold in all-around gymnastics. This is a tremendous accomplishment that again should have been trumpeted far and wide, but the media was much more interested in discussing Biles. It would be one thing if commentators were lamenting how tragic it was for Biles to pull out of competition after having made it so far, and to be clear it is. Biles withdrawing for mental health reasons is akin to an athlete suffering a physical injury or illness that makes it impossible for them to continue, only when an athlete withdraws due to injury or illness it is recognized as the unfortunate turn of events that it is. D’Souza Gill points out that our modern media took an entirely different tactic in Biles’s case, lionizing her for giving in, essentially, to a mental injury, while largely ignoring Suni Lee’s historic triumph.

D’Souza Gill discusses the different way Biles is treated than an athlete like Tom Brady would have been had he withdrawn half an hour before the Super Bowl. Leaving aside the different standards male and female athletes are held to, it is safe to say that if Brady had announced he couldn’t compete due to mental health issues, he would not have been hailed as heroic.

In Biles’s case, however, D’Souza Gill argues that not only is the media likely to blame in part for her withdrawal by placing so much pressure on her to win gold before she even made it to Tokyo—as if it were a foregone conclusion—but have been singing her praises for withdrawing.

In a clip D’Souza Gill shows, Sunny Hostin of “The View” mangles a Shakespeare quote (it’s “To thine own self be true,” Ms. Hostin; Polonius to Laertes as he leaves Denmark for Paris, “Hamlet” Act I, Scene III) while Joy Behar declares that being the best at something is not a good thing. It’s so counter to the idea of American exceptionalism, and indeed the entire point of sporting competitions themselves, that it’s jaw-dropping. Sadly it’s not particularly surprising coming from the side of the political spectrum that believes in participation trophies.

Holding up the idea that athletes quitting due to injury or illness is brave as opposed to a tragedy is not reserved solely for Simone Biles. Naomi Osaka received similar coverage when she dropped out of the French Open earlier this year for mental health reasons.

While there is certainly an argument to be made for normalizing mental health conditions and destigmatizing those who suffer from them, it hardly seems that praising people for having to drop out of competitions due to their illness is the way to go about it.

If an athlete had to leave a sport due to diabetes complications we wouldn’t talk about how stunning and brave they were. We would bemoan the loss of their chance to compete and move on. Harping on it arguably makes it seem like something that is less normal, not more. The media certainly hasn’t spent days praising athletes over the last year who needed to withdraw from all manner of sporting competitions due to contracting COVID-19. Why the change in the coverage of Biles?

D’Souza Gill postulates it has to do with the American left valuing emotion above all else. Biles has placed a great deal of emphasis on her feelings when talking about her decision to withdraw and received so much online praise she declared that she finally felt like she had some worth as a person outside of her sport. Setting aside how truly sad that statement is, it isn’t difficult to see why those on the left would fall all over themselves to declare, “You go, girl!” and “Yas queen!” when they care primarily about whether someone feels good about themselves in the end, regardless of the consequences of their actions. While they should be celebrating those who overcome their illnesses to do great things, instead they laud succumbing to them, with nary a comment about the sufferer finding help in sight.

The second portion of the episode and bulk of the half-ish hour is devoted to an interview with Trish Regan, who has her own podcast now after hosting “Trish Regan Primetime” on Fox Business from 2015 to 2020.

After asking Regan to give a brief biography of what brought her to journalism, D’Souza Gill dives into a discussion of how media has changed over the course of her career.

It will come as a surprise to no one that Regan had seen a dramatic shift in journalism from unbiased reporting—or an attempt at it anyway—to flat-out activism.

She talks plainly about the way the media has turned from relaying a story to an audience and allowing them some leeway to make up their own minds, to deciding a narrative and shoving it at the public as verified fact.

Regan also discusses the issues with social media and how Big Tech companies, which are essentially monopolies, block or delete any stories that go against the narrative. Big Tech can deny they do this all they like or ascribe it to violations of their ever-changing terms of service, but one has to be a special kind of partisan to believe these claims.

D’Souza Gill and Regan then discuss the Olympics and sports in general, and how the behavior of certain athletes has lowered the United States in the world’s eyes.

Kneeling for the anthem or turning one’s back on the flag at an international competition like the Olympic Games highlights our current political division, provides fodder for our enemies, and ultimately makes the United States a laughingstock.

Regan laments the way this division and social justice activism undermine the message to young people that they can be anything they want to be, as well as the way politics has invaded sporting events that the average American is using as an escape. She suspects that it is only a matter of time before the public at large revolts against this political creep in a way the left likely doesn’t expect.

Regan and D’Souza Gill move on to the way corporations are caving en masse to wokeness, making it impossible for anyone to avoid political messaging wherever they turn. Regan suspects that this, too, will backfire eventually, while D’Souza agrees, stating that the left always ends up eating its own.

Regan states emphatically that corporations and athletes teaming up to divide us do nothing to ensure the even playing field and access to opportunity that allow Americans of every color and creed to succeed.

In the remainder of the 36 minutes D’Souza Gill and Regan run the gamut from Lyndon Johnson’s policies, to the way Republicans are dropping the ball when it comes to fighting leftist ideology, to participation trophies in schools, to the problems with socialism.

Regan remains optimistic that children will be able to see through the left’s attempts to make everyone equal by making everyone mediocre, since even children can tell the difference between a trophy they’ve simply been given and a trophy they’ve actually earned.

This is an important episode to watch before the Tokyo Games fade too far into memory to recall athletes like Mensah-Stock and Lee triumphing even as Biles and Berry flopped.

The conversation surrounding American exceptionalism, which has become something of a dirty concept, is crucial to hear when ordinary citizens are being called to the front lines to push back against school boards and social media as they try to indoctrinate our youth.

D’Souza’s commentary and Regan’s analysis of the issues are well worth the time it will take to view and share this episode with friends and family, whether they watched the Olympics or not.