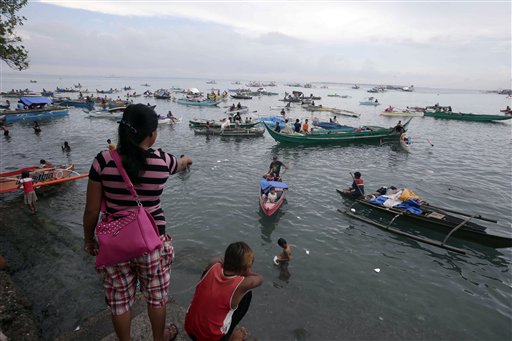 Villagers arrive by boats to flee the current standoff between Government troopers and Muslim rebels at the southern port city of Zamboanga in southern Philippines Wednesday, Sept. 11, 2013. Muslim rebels holding scores of hostages in the southern Philippines are demanding international mediation, an official said Wednesday, as fresh rounds of fire broke out between government troops and the guerrillas on the third day of the standoff. The rebels, enraged by a broken peace deal with the government, are holding the civilian hostages as human shields near the port city of Zamboanga. Troops have surrounded the Moro National Liberation Front guerrillas and their hostages in four coastal villages. (AP Photo/Bullit Marquez)
Asia & Pacific

Muslim rebels are still in Zamboanga City for the fourth straight day as local officials dialogued with both the rebel commander and the Moro National Liberation Front chairman.

The Moro National Liberation Front (MNLF) was created in the early 1970s and its primary goal is to create a separate Muslim state in the southern Philippines. A peace accord was signed between Misuari, the leader of the group, and then-president Fidel Ramos in 1996 granting the front a four-province Autonomous Region of Muslims, according to the U.S.-based National Consortium for the Study of Terrorism and Responses to Terrorism. In 2001, though, Misuari “returned to to his terrorist roots with his November 2001 attack on an army base that led to 100 deaths.”

It has been unclear whether Misuari was directing the hundreds of rebels who have entered the city, engaged in firefights with soldiers, and taken hostages.

Misuari on Thursday disowned Habier Malik, a lieutenant of Misuari’s who is leading the rebels in Zamboanga City, according to Zamboanga City Mayor Beng Climaco, who spoke with both.

Also on Thursday, rebels attacked the city of Lamitan.

In a 10 a.m. statement broadcast on Twitter and Facebook, Climaco said that military and police forces are doing their best to resolve the crisis while the Liberation Front forces are in 6 of the 98 barangays, or areas of the city.

They are “inflicting damage not only to lives and properties but to the economy of our beloved Zamboanga City,” said Climaco.

“At this point, allow me to address key sectors of the community:

Liberation Front Still Has Hostages; Thousands Have Fled Their Homes

There are still hostages being held by the Liberation Front, though the number is unclear. At some points it has been as many as more than 300.

Climaco called on the hostage takers to let go of the hostages, “especially the elderly, the sick, the children and people with disabilities.”

Meanwhile, more than 13,000 people have fled their homes, many from the districts that are at least partly under rebel control.

At least nine people have been killed in the situation, with dozens more wounded.

“There is no need for an international body to mediate on the matter but sincerity and calm from all parties involved,” he said in a statement obtained by the Philippine Sun-Star.

The rebels called for international mediation in the conflict from the United Nations.

The rebels are enraged by a broken peace deal with the government and “they refuse to listen to anybody locally,” said Climaco.

“They say that it’s an international problem, and no less than the international community, the U.N., should come in,” she told television network ABS-CBN. Shots rang out as she spoke from the city hall.

House Speaker Feliciano Belmonte Jr. said that Congress can be the third-party mediator.

Trouble with Rebels Began on Sunday

Then a navy patrol spotted a large boat and eight smaller vessels carrying dozens of armed guerrillas off Rio Hondo, sparking a gunbattle at sea that killed a member of the navy special forces and wounded six others.