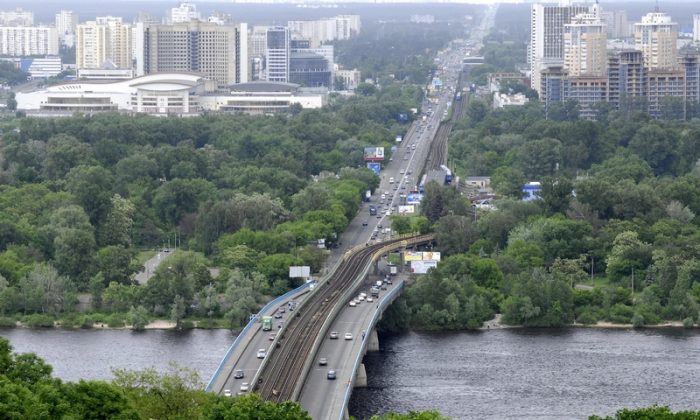 Panorama of the Dnipro River in Kyiv with residential buildings in the background. Most young families in Ukraine can't afford housing. (Vladimir Borodin/The Epoch Times)
Europe

KYIV, Ukraine—It’s not easy for young families in Ukraine to afford a place to live. High real estate prices, comparatively low wages, and hard-to-obtain loans are keeping some young couples under their parent’s roofs longer.

Catherine and Andrei Yurchenko are typical young Ukrainians—they graduated from university several years ago, got married, and moved on to the next step of finding a home of their own. Now they live with parents in Kyiv.

The Yurchenkos live on a budget of $370 a month. The average monthly salary in Ukraine is $375, or $4,500 annually. In the cheapest district of Kyiv, 10.76 square feet (1 square meter) of real estate costs $1,556, according to April 14 estimates by SV Development consulting agency.

A two-room apartment of 150 square feet would cost at least $77,800. On the average Ukrainian salary, even if half the yearly wages are set aside for housing, it would take 34 years to be able to afford that.

Catherine Yurchenko strongly objects to getting a loan.

For average Ukrainians, it’s hard to get a loan. Most banks require a down payment of 30 percent, according to Prostobank Consulting, which specializes in Ukrainian real estate speculation. This sum is overwhelming for most young Ukrainians.

The state has taken some initiative to relieve young families—it launched a program called Accessible Accommodation in May 2012.

The program presupposes, however, an annual loan interest rate of 3 percent, while the average rate is more than 20 percent, according to Prostobank figures.

However, only about a thousand people are currently using this program. Experts explain that the average Ukrainian cannot afford to take part in the program. It requires an initial contribution of 25 percent of the price, only 5 percent less than the banks require.

Real estate expert Andrei Huselnikov, cited official statistics, saying Ukrainians have a total of about $105 billion in savings; when divided by the economically active population of about 22 million people that means a Ukrainian might have about $4,770 in savings.

“Can people with this amount of money take part in such programs, when you have to make initial contribution of 25 percent—at least from $10,000 to $15,000? Apparently, not,” he said.

The Accessible Accommodation program is led by Leonid Risuhin of the State Fund for Youth Housing Assistance. He remains optimistic.

He says that annually, the number of families getting apartments grows by 1.5–2 times. In the last year, about 1,260 people got state support, Risuhin said, and he predicts that in 2013 the state will help 6,000 families get housing.