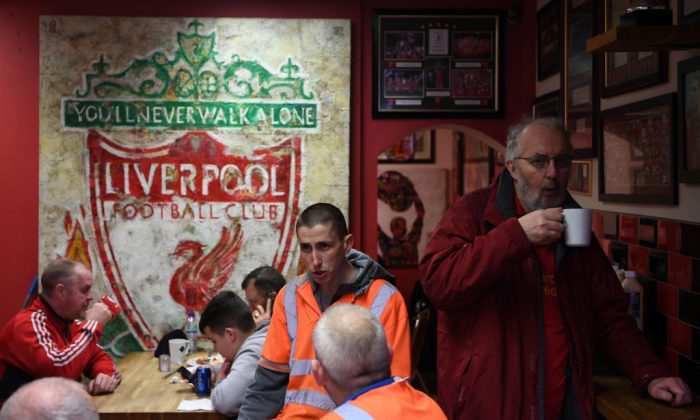 Liverpool fans enjoy some pre-match food in a local cafe prior to the Premier League match between Liverpool and Everton at Anfield in Liverpool, England on April 1, 2017. (Gareth Copley/Getty Images)
International

BIRMINGHAM, England—The British synonym for “pub” tells it all: The “local” was traditionally the community hub, where pints of beer and cider loosened the stiff upper lip.

But drunken revelry is no longer the social glue it once was, with alcohol consumption dropping among young people.

The latest data from the Office of National Statistics, released on May 3, shows that while binge drinking culture persists, overall alcohol consumption is following a downward trend in the Western world.

The reasons are hard to pin down and are linked to a broader shift in cultural values, say experts.

“Before, if you wanted to socialize, you would meet up in the pub and people would have alcoholic drinks. Now there are more options,” said Richard de Visser, director of student experience at the University of Sussex and a researcher of young people’s alcohol behaviors.

Millennials are more likely to head out to cafes, and there is no longer a social expectation to drink. It’s okay to be teetotal.

The latest statistics show a huge drop in drinking for males in their late teens and early 20s, and a slight increase for females, said Aveek Bhattacharya, a policy analyst  at the Institute of Alcohol Studies. He warns that the gender difference may just be noise in the data.

“What is clear is that there has been a long-term downward shift among both men and women, particularly among 16- to 24-year-olds and also among younger groups,” he said.

“I suspect that millennial culture is part of it—but the decline isn’t limited to millennials alone.”

In a 2016 report on drinking among young people, Bhattacharya examined various theories on the drop in drinking, including the influences of technology and social media, religion, alcohol pricing, health perceptions, rebellion against parental values, and the economy.

“It is a bit of a mystery at the moment. Affordability is very likely to have played a part in it, but it can’t explain the whole lot, because consumption started to decline in 2004 and 2005,” he said.

Today’s 21-year-olds grew up in a recession, said Bhattacharya, and students don’t want to squander their time, energy, and money on drinking culture

“Young people are going into a very competitive marketplace where you are going to have to scrap for every job and knuckle down at university,” he said.

While the causes are hard to pin down, intergenerational rebellion could be part of the story, said James Nicholls, director of research and policy development at Alcohol Research U.K.

“Drinking levels tend to go in waves, with the children of heavy-drinking generations often rejecting drunkenness. Who wants to be like their parents, after all!?” Nicholls said.

But Bhattacharya isn’t convinced. “People whose parents drink more are more likely to drink themselves,” he said.

The advent of social media, smartphones, and other technology may be a factor as well, said Nicholls. “Young people have many more ways of socializing than previously, and they tend to be less centered on alcohol and drinking spaces.

Some suggest the drinking culture is changing because of a greater awareness of the health impacts. There is also some evidence that increasing religiosity and abstinence are factors.

But de Visser said that young people respond more to messages about losing control. They are motivated by fear of embarrassing themselves on drunken escapades that for past generations were a badge of honor and even a bonding experience.

De Visser said Europe is split into “wet and dry” cultures, in the south and north, respectively.

“Dry cultures are very sober and respectable during the day, but when you have a party, look out! You see that in Scandinavian cultures,” he said.

“In what we call the wet cultures, drinking is much more part of the day, so they might have a drink in the day or with lunch.  The patterns are quite different. They don’t drink to get drunk.”

But drinking is declining in young people in both wet and dry countries.

The trend is almost universal in the world’s rich countries. Conversely, developing countries are moving to drinking habits more typical of the Western world.

The number of pubs in the United Kingdom has steadily dropped by half over the last century. Between 2003 and 2011, pub beer sales dropped by 30 percent.