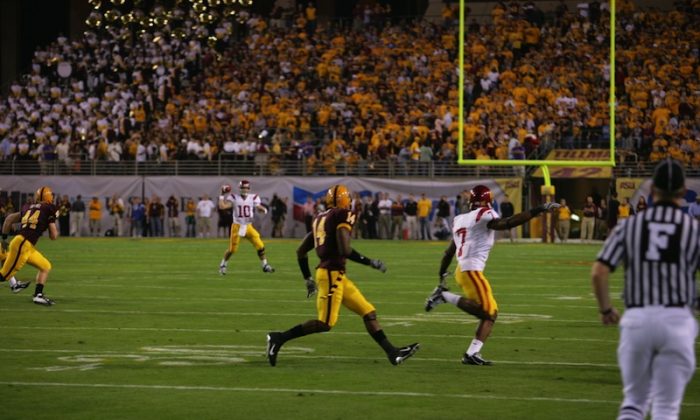 You Know Who Else Uses Unpaid Interns? Colleges and Universities

For students interested in a career in sports management, Arizona State University has what seems like a great opportunity. The school’s athletic program, which boasts of 138 national championships, is advertising for an intern to help with “event staging” for the Sun Devils’ football, basketball, and other games.

There are just a few drawbacks. “This position requires physical labor,” the ad states. “The intern must be able to lift up to 50 pounds and work outdoors in extreme weather conditions.” The work is also completely unpaid.

Over the past year, unpaid internships in journalism, film, and government have drawn increasing scrutiny. But it turns out, universities aren’t simply sending off kids to internships in these and other fields. Some schools — notably, their athletic departments — are themselves hiring unpaid interns whose responsibilities can sound quite similar to those of everyday employees.

Florida Gulf Coast University, for instance, advertises for an unpaid “Business Operations Intern” whose responsibility would include “processing purchase orders and payment on invoices” and “accurate paperwork filing procedures.” A university website also advertised for an “Athletics’ Facilities and Operations Intern” whose responsibilities include “supervision of the part time Event Staff to hold them accountable for the jobs they perform.” (The department removed that ad after we contacted them, saying the phrasing was inaccurate. They have not reposted it.) Ads for paid jobs at the university list similar responsibilities.

In order to be legal, most internships must not replace paid positions and must also offer significant educational benefits. But the federal government gives nonprofits, including universities, more leeway. (Federal internship guidelines also don’t apply to work-study arrangements, which have long existed as a way to allow students to work part-time to earn money toward their degrees.)

Whatever the law, internships at universities should have clearly defined academic components, said Messiah College internships director Michael True. Otherwise, universities may not be any better than an employer who doesn’t pay but still benefits from the intern’s work.

True oversees internships at Pennsylvania’s Messiah College, and has for two decades overseen an online discussion forum for college internship coordinators. Whether or not a student gets academic credit for an internship, said True, it needs to go beyond doing clerical or administrative tasks.

A spokesman for Arizona State University athletic department, Doug Tammarro, said students work with the department in many ways, paid and unpaid, but that the department doesn’t have specific guidelines for who counts an “intern.” As for advertising the possibility of performing physical labor as an unpaid intern, Tammarro said they’re careful not to overwork the students, but “if you work in athletics and facilities, you’re probably going to be asked to do some type of physical labor.”

A university spokeswoman said the school’s human resources department does not manage student internship programs, but she was not able to provide additional comment as of the time of publication.

Still, without the help of the department’s interns, Banko said that “some of those would have to be paid positions.”He said working without interns would still be feasible, but “would it make my days much longer? Yes.” As of publication time, a university official said no one was available to comment further on the school’s on-campus internship policies.

Of course, even unpaid internships can benefit students, helping them get a foot in the door to what is ultimately a very competitive industry. Duane Bailey, deputy athletic director at Seton Hall University, said he’s seen firsthand “how difficult and frustrating it is for a lot of kids looking for work.” Bailey himself started as an unpaid intern.

Seton Hall University’s athletics department offers unpaid internships to students looking to gain experience, but Bailey said unpaid interns don’t replace paid employees and are simply “an answer to the constant stream of requests that we’ve received from students looking to get experience.” Career Center Director Reesa Greenwald said all on-campus internships are expected to adhere to the same standards as off-campus ones, and that the school prioritizes educational aspects and oversight above compensation.

“I do know that there are many institutions that rely on their intern programs to supplement their workforce but that’s not our model,” Bailey wrote in an email. “If we were to discontinue our program tomorrow there would be zero impact to us.”

But the work doesn’t give all students a leg up. George Twill, a former Seton Hall intern who graduated last year from Fairleigh Dickinson University, said there wasn’t anything necessarily negative about his experience—except for the lack of pay—but it did make him rethink a career in college athletics.

Twill said the work he was doing, which included a lot of data entry related to ticketing, related somewhat to his work toward his master’s degree in sports administration, but the position seemed to teach him more about event ticketing than the athletics industry. Interning without pay was difficult, too, he said: “It gets old really fast.”

In one of the few legal cases involving unpaid internships at universities, a former intern at New York’s Hamilton College filed a lawsuit last year, seeking class-action status, alleging that the school’s athletic department improperly classified its interns to avoid paying the minimum wage. Attorneys for Benjamin Kozik—who wasn’t a student at the time of his internship—say their client was paid about $1,000 month but sometimes worked up to 90 hours per week and “was given additional responsibilities as a Special Teams Coordinator without an increase in pay,” among other allegations.

That case has yet to be decided, and a Hamilton spokesperson declined comment, citing the ongoing litigation.

Massachusetts-based lawyer William E. Hannum III— who specializes in labor law and often represents universities—said schools don’t have a “special deal” on unpaid internships and still need to “refer to and comply with applicable wage and hour laws.”

Mike Julius said his unpaid internship with Florida Gulf Coast University’s athletics department gave him valuable experience in sports marketing, and that he often felt less like an intern than a regular staff member. At the time of his internship, Julius said, the department was down a full-time employee, so he picked up some additional responsibilities. He got lots of hands-on experience, but no paycheck.

Julius graduated in management (with a sports concentration), but he isn’t working in the industry anymore. After losing his full-time job when the minor league baseball team he was with downsized, he began working at a department store in Toledo, Ohio.

Now, Julius said he’s looking for another job in sports. He says his search thus far has included plenty of positions that pay “basically nothing.” But he expected that.

“It’s a hard field to get into,” he said. “It’s more about love of the job than the money.”

Have you interned for your college or university? Do you oversee student interns at your institution? We want to hear from you. (Share your story here if you’re a student and here if you work in higher education.)

This story first appeared in ProPublica.