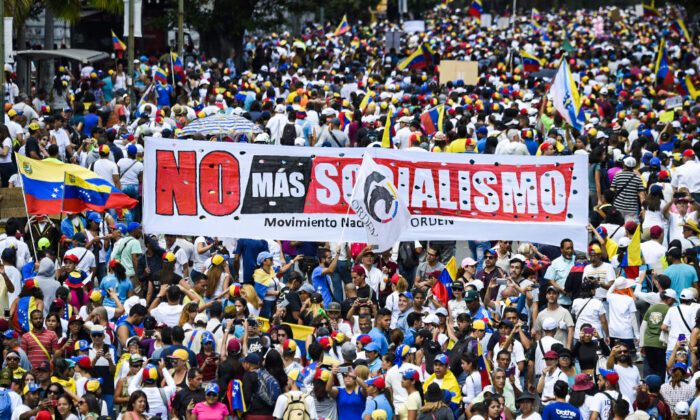 ‘You Didn’t Have a Choice’: Project Captures Stories From Canadians Who Once Lived Under Socialism, Communism

Venezuelan human rights activist Rodrigo Diamanti was forced to flee his country after being arbitrarily detained, kidnapped, and threatened at gunpoint because he organized protests against the socialist government’s totalitarian rule.

Diamanti is the founder of the human rights organization Un Mundo Sin Mordaza (A World Without Censorship), which promotes human rights and freedom of expression in Venezuela. He embarked on civic activism many years ago, starting with a student movement that worked for free and fair elections and more transparent government.

But Diamanti’s fight for people’s rights and freedoms didn’t sit well with President Nicolás Maduro’s socialist government, and he was imprisoned in May 2014. Though he was released days after his arrest due to international pressure, within a year he was kidnapped and threatened at gunpoint for organizing more protests.

Diamanti’s case is one of several highlighted by SecondStreet.org, a Regina-based public policy think tank, as part of its “Survivors of Socialism” project. The initiative aims to educate people about the true nature of socialism and communism through interviews with Canadians who once lived under these oppressive regimes.

“We often hear politicians, academics, and activists praising socialism and communism, [but] the facts show that those ideologies have had a horrendous track record all over the world wherever they’ve been implemented,” SecondStreet.org president Colin Craig told The Epoch Times.

Arrogance has led some living in free societies to believe that totalitarian states have failed to deliver utopia as the theories of socialism and communism promise simply because these regimes “just didn’t do it right,” and they themselves are more capable of realizing such ideals, Craig said.

“You often have university professors that romanticize these regimes, but they’ve never actually lived under them,” he said.

“The ideals of socialism and communism are presented as utopian societies where everyone’s equal and everyone lives quite well. That doesn’t happen. The elite in those countries do quite well, for they have access to goods and services that the masses do not. … Inevitably, there’s immense suffering among the people.”

“People aren’t being taught in school the full story of socialism and communism,” Craig adds.

Life Under Communism in Romania

Viorica Robinson told SecondStreet.org that there’s a “big difference” between her daughter’s life here in Canada and her own growing up under the communist regime of Nicolae Ceaușescu, who was leader of Romania from 1965 until 1989, when he was overthrown and killed in a revolution.

Robinson said Ceaușescu’s policy of exporting much of the country’s agricultural and industrial production to pay for the massive foreign debt incurred by the regime’s failed economic and social planning caused starvation and hardship for Romanians.

“I remember we had to line up, sometimes two or three hours, before they opened the store. There could be a lineup for like a mile to get the necessities like bread, sugar, oil, and other things, because Ceaușescu was trying to pay the entire debt that we had,” she said.

“He pretty much starved us to death, some of us, because he was exporting everything we produced in order to make money to pay the debt. So it was a difficult time.”

She said that by eliminating almost all private business and controlling production, the government had control over every aspect of people’s lives.

“Everything was set up that was easy to control on absolutely every level—food, entertainment, everything. There was no choice for you,” Robinson said.

“You didn’t have a choice if you wanted to go see this movie or the other movie. But there are movies the Communist Party wants to broadcast, so that was your choice.”

In April, SecondStreet.org released a policy brief noting the importance for policy-makers in Canada to avoid the mistakes made in socialist or communist countries.

As part of that, the group conducted a mini-survey of 35 Canadians who had lived under socialism or communism, to learn more about their experiences and also to ask if there are any emerging policies in Canada that concern them. Many respondents said their top concern was the federal government’s efforts to regulate internet content—legislation that has raised alarms about impacts on free speech.

“When we surveyed Canadians who lived under communist and socialist regimes, the policy in Canada that concerns them the most are actions by the government to curtail free speech,” Craig said. “When you hear their stories, it’s understandable why—they’re very sensitive about anyone trying to curtail what they can say.”

Robinson said she’s observed that Canadians “have a hard time understanding that [communism] can be possible here.”

“What we need to understand [is that] freedom is not a negotiation—you’re either free or you’re not.”

SecondStreet.org plans to interview more Canadians who suffered under socialist or communist regimes, including those from China, North Korea, and the former Soviet Union states.

As for China, it has transitioned to a market economy but still maintains a communist political structure that is “certainly lacking in many areas when it comes to human rights,” Craig says.

“Citizens are always better off in a true democracy, when they can vote for multiple political parties instead of having a single party run the state,” he says. “The other challenge with China is the lack of human rights, whether it’s the treatment of the Uyghur people or just the state’s ability to basically do what it wants.”