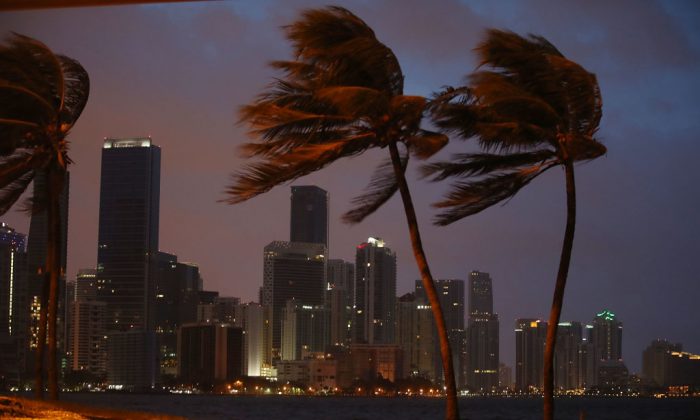 The skyline is seen as the outer bands of Hurricane Irma start to reach Florida on Sept. 9, 2017 in Miami, Florida. (Joe Raedle/Getty Images)
US

Deadly Hurricane Irma has already pummeled the Caribbean and is now set to hit Florida.

You can watch the hurricane as it unfolds on a number of live web cameras set up around the state.

Note: Some streams are offline since parts of Florida lost power. We have added live streams from local TV channels to keep you up to date.

You can watch live coverage of the storm from local Florida TV stations on the following streams.

A web cam is set up on Miami beach with a view of the ocean from the upper level of a building.

A web cam in Sunny Isles also offers a view of the beach that is sure to be intense when Hurricane Irma lands on Sunday morning.

There is also a live web cam facing the beach in Coconut Grove.

Cameras are also set up in downtown Miami and Ocean Drive.

The University of Tampa is running a live web cam facing the main rotunda of the campus.

Clearwater Beach in West Florida has a live web cam facing the bay.

The park has a web cam that posts a still image every 45 minutes.

Fort Myers is expected to be hit with some of the strongest winds from Hurricane Irma. A web cam is set up on the beach for anyone to watch the action unfold.

A web cam on Siesta Beach will show the impact of Irma once it moves north.

A camera set up on the roof of Two Friends restaurant points at the corner of Duval and Front Street.

A camera at the Southern Most Beach Resort shows a view of the pool and the beach beyond.

A live web cam operated by Broadwave Live Cams is pointing at a cruise ship dock.

A camera set up on the island of Marathon overlooks beachfront properties and an expanse of ocean.

Hurricane Irma gained strength as it was set to make landfall in Florida on Sunday with a double-barreled threat of destructive winds and life-threatening storm surges, prompting one of the largest evacuations in U.S. history.

The storm, which went on a deadly march up Cuba’s northern coast a day earlier, was a Category 4 hurricane about 30 miles (50 km) south-southeast of Key West, Florida, as of 6 a.m. EDT (1000 GMT) with maximum sustained winds of 130 mph (210 kph), the National Hurricane Center (NHC) said.

It was on a path that would take it along the state’s Gulf of Mexico coast near population centers including Tampa and St. Petersburg, it said.

Storm surges pushed by a high tide were forecast to be as high as 15 feet (4.6 meters) for low-lying areas along the state’s southwest coast on Sunday, which could produce catastrophic flooding for thousands of homes.

“Take action now to protect your life,” the National Weather Service in Key West advised. “This is an extremely dangerous and life-threatening situation.”

Irma, which killed at least 22 people in the Caribbean, was likely to cause billions of dollars in damage to the third-most-populous U.S. state.

Wind gusts near hurricane force began to batter the Florida Keys late on Saturday, the NHC said, with Key West seeing gusts of more than 80 mph on Sunday morning and water levels about 2 feet (61 cms) above normal. The area was expected to feel the full brunt of Irma starting at around 7 a..m. to 8 a.m.

Thousands of people spent the night in emergency shelters ahead of the storm expected to rip through Florida’s southwestern archipelago on Sunday morning as a Category 4 storm, the second-highest designation on the Saffir-Simpson scale. Irma should weaken as it moves inland over the Florida panhandle and southwestern Georgia on Monday afternoon, the NHC said.

The NHC has put out a hurricane warning and a tropical storm warning stretching through almost all of Florida into Georgia and South Carolina – an area where more than 20 million people live.

The city of Miami imposed a curfew until 7 a.m. on Sunday and more than 381,000 customers in Florida were without power as of Sunday morning, the governor’s office reported.

Tracking models showed Irma would make landfall on the Keys and head along Florida’s west coast, slamming the state that is a major tourism hub, with an economy comprising about 5 percent of U.S. gross domestic product.

More than 2,000 flights in and out of Florida were canceled on Saturday, according to tracking service FlightAware.com, and ground transport was scrambled by millions fleeing for safety.

Amid urgent warnings from state officials to evacuate before it was too late, downtown Miami was all but abandoned on Saturday.

Sheets of rain and wind gusts of more than 50 mph swept through the deserted city of 400,000 people several hours before expected landfall.

The wind sent a construction crane spinning on the roof of the Miami Worldcenter, a billion dollar mixed-use project near the home of the Miami Heat basketball team and the city’s performing arts center.

On Florida’s west coast, resident Charley Ball said he expected a storm surge to completely engulf the island of Sanibel where he lives.