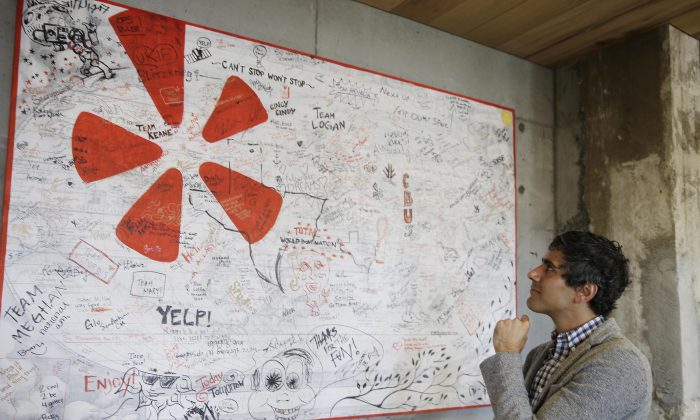 In this photo taken Friday, Aug. 1, 2014, Yelp CEO Jeremy Stoppelman looks over a wall signed by visiting employees from other cities at his company's headquarters in San Francisco. (AP Photo/Eric Risberg)
Business

Revenue was $118.5 million, which trailed behind investor expectations of $119.8 million, according to Bloomberg. Yelp’s estimate for second quarter sales of $131 million to $134 million, also fell behind investor predictions of around $137 million.

The company acquired Eat24.com for $134 million during the first quarter, a vertical which lets consumers order in from 20,000 restaurants nationwide.

Yelp also added six new partners for its Yelp Platform feature, which allows customers and businesses to conduct transactions. For now, it’s mostly food delivery, but the company hopes to expand to salons, spas, and dentist appointments. Users can also use Yelp’s SeatMe to make reservations at participating restaurants.

Company executives emphasized that growth was up 55 percent in revenue and that the average number of unique visitors had grown 8 percent year over year to about 142 million.

“We’ve made significant progress on our key initiatives for 2015,” said Yelp CEO Jeremy Stoppelman in a statement, “Looking to the rest of the year, we will continue to seek ways to increase engagement and drive awareness, while striving to demonstrate the value we can deliver to local businesses in order to capture the large local advertising market opportunity.”