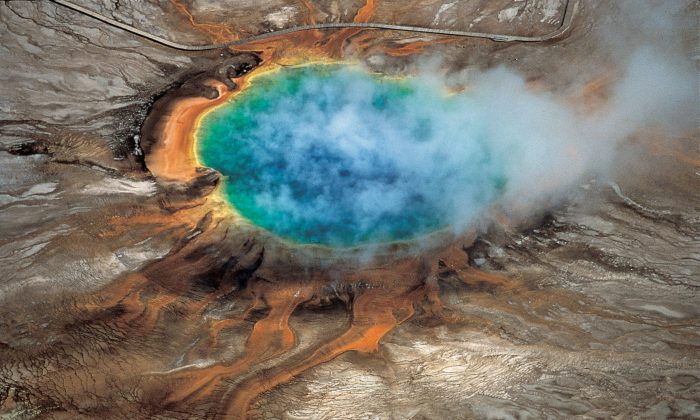 The gorgeous colors of Yellowstone National Park’s Grand Prismatic hot spring are among the park’s myriad hydrothermal features created by the fact that Yellowstone is a supervolcano – the largest type of volcano on Earth. A new University of Utah study reports discovery of a huge magma reservoir beneath Yellowstone’s previously known magma chamber. That doesn’t increase the risk of an eruption, but means scientists are getting a better view of Yellowstone’s volcanic plumbing system. (“Windows into the Earth,” Robert B. Smith and Lee J. Siegel)
US

Yellowstone Supervolcano Found to be 4.5 TIMES Bigger Than Previously Thought

Scientists already knew the Yellowstone supervolcano has a gigantic magma chamber at the bottom, but have just discovered an even bigger magma chamber that’s 4.5 times the size of the first one.

Combined, the chambers hold enough hot rock to fill the Grand Canyon nearly 14 times over, the researchers said in the study published in the journal Science.

The new research has revealed the first three-dimensional image of the inner workings of the supervolcano, showing an 11,200-cubic mile magma reservoir below the previously known 2,500-cubic-mile magma chamber.

The researchers used earthquake data to form the equivalent of a CT scan, utilizing a national seismic network. Using seismic imaging to focus on earthquake waves, they were able to distinguish rock of various densities. Quake waves go faster through cold rock and slower through hot and molten rock.

Hsin-Hua Huang, first author of the research and a postdoctoral researcher in geology and geophysics at the University of Utah,actually developed a new technique to combine seismic information from the Yellowstone area and similar information from more distant quakes.

Although the volcano could erupt at any time, many scientists emphasize that they have no idea when it will. The new research contributes to working toward better understanding of the volcano.

“Every additional thing we learn about the Yellowstone volcanic system is one more piece in the puzzle, and that gets us closer to really understanding how the volcanic system works,” study co-author Fan-Chi Lin of the University of Utah told the Smithsonian.

Robert Smith, professor of geology and geophysics at the university, and co-author of the study- said in a statement that there is no increase in danger. “The actual hazard is the same, but now we have a much better understanding of the complete crustal magma system,” he said in a statement.

While the 3-D images give new insight into the supervolcano, Lin noted that researchers are still unable to see how the molten rock in the two chambers are situated, making it difficult to predict future eruptions.

Line emphasized that there would likely be a number of warning signs leading up to any eruptions, such as earthquake swarms, ground uplift, and more volcanic gasses coming out of the ground.

“We can’t say how much of a warning we would have,” he said, “but it could be on the order of days to months to years.”