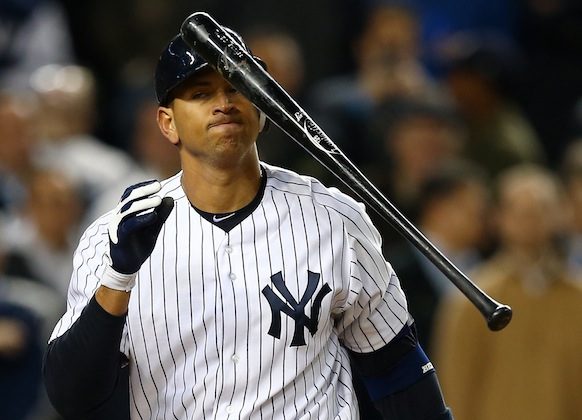 Alex Rodriguez was already a question mark heading into 2013 after an abysmal playoff stint. Now needing hip surgery, what do the Yankees do? (Elsa/Getty Images)
Baseball

As if the Yankees didn’t another reason to look for a long-term replacement for A-Rod, who struggled mightily in the playoffs after missing a good part of the second half of the season, there’s this newly-announced twist: A-Rod needs left hip surgery and will miss four to six months.

The surgery can’t even happen until Rodriguez completes a four-to-six week pre-surgery strengthening program, delaying his surgery until January.

“Alex is expected back—that’s the good thing,” Yankees general manager Brian Cashman said, according to a report on the team’s website. “The bad thing is, obviously, we don’t have him for a period of time, so what are we going to do about that? It remains to be seen.”

Actually the bad thing for Cashman is that Rodriguez will be nearing his 38th birthday (July 27) upon his return and after missing 40 games last year, and 63 the year before, A-Rod may no longer be a viable candidate to play third, let alone hit third. Oh, and he’s still owed $114 million over the next five years. But let’s look at next season.

What are the Yankees options at this point? Let’s run through them.

This is the most likely option. There are no big-name free-agent third basemen on the market right now. Having a righty/lefty combination of these two wouldn’t be cheap this season, but likely won’t cost them more than a year. When A-Rod comes back the Yankees can then determine whether his days at third are over. If not, Youkilis would most likely be a decent trading chip at the July 31st deadline. If they are, then they move him to DH and hope they aren’t creating a logjam there.

Naturally this doesn’t solve anything beyond 2013, but they Yankees will have a number of voids when Pettitte, Jeter, and Rivera finally hang them up.

2. Make a blockbuster trade for a third-baseman.

This isn’t as easy as it sounds, but there are some teams who could stand to part with some third base talent. Texas looks like one of those teams.

The Rangers currently have Adrian Beltre in the big leagues with 24-year-old Mike Olt, currently ranked 16th best overall prospect by MLB.com, ready to be promoted.

Not only do the Rangers have a younger replacement ready (Beltre will turn 34 in April) but the 15-year veteran Beltre is still owed a hefty $51 million over the next three seasons and has a $16 million vesting option for 2016. With the Rangers wanting to hang on to Josh Hamilton and somehow coerce Zack Greinke to sign, parting with Beltre’s may be the only way to do it.

For the Yankees, Beltre is appealing because he’s aged well up to this point, finishing in the top-15 in MVP voting each of the past three seasons and winning two straight Gold Gloves. If they were willing to take on his full salary, he certainly could be had for some pitching/catching prospects.

3. Try out some in-house options.

This is the least likely option.

The Yankees, which seem to be trying to avoid paying the big luxury tax dollars, probably will have trouble affording the first two options, but with such a successful veteran team they can’t afford to not add payroll to supplement third base.

Their best in-house option would be 25-year-old Eduardo Nunez, who hit .292 in 38 games last season, though only nine of those games were at third base. Nunez is more of a shortstop though and with Jeter’s uncertainty following ankle surgery Joe Girardi surely will want a better, more powerful option (Nunez has seven home runs in 448 major league at bats) at the hot corner. So will Yankee fans.