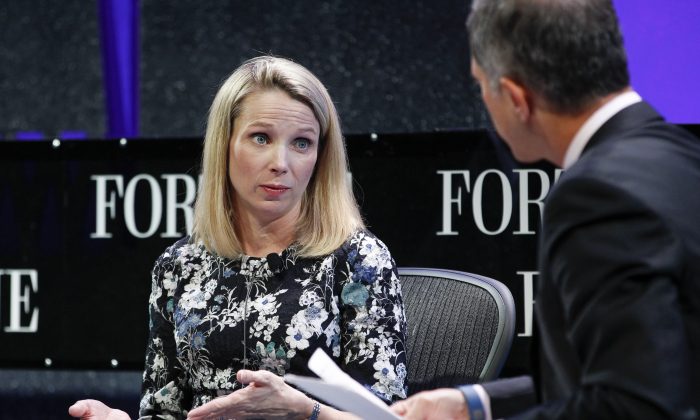 Marissa Mayer (L) and Adam Lashinsky speak on a panel during the Fortune Global Forum - Day2 at the Fairmont Hotel on November 3, 2015 in San Francisco, California. (Kimberly White/Getty Images for Fortune)
Business & Markets

SAN FRANCISCO—Marissa Mayer’s nearly four-year attempt to turn around Yahoo needs a turnaround itself, repeating a pattern of futility that has hobbled one of the Internet’s best-known companies for the past decade.

Like her predecessors as Yahoo CEO, Mayer has been unable to snap the company out of a financial funk despite spending billions on acquisitions and new projects. Yahoo’s stock has sunk by 35 percent so far this year as investors’ frustration with the follies have mounted, spurring calls for her replacement.

“This is like an ’emperor has no clothes’ situation,” said Eric Jackson, a Yahoo shareholder and managing director of the New York hedge fund Ader Investment Management. “The company and the shareholders would be better served with her leaving.”

If Mayer continues down her current course, Smith is threatening to lead a shareholder mutiny aimed at overthrowing Yahoo’s board next year—a rebellion that, if successful, could lead to her ouster.

Yahoo’s own employees seem dispirited as well. Mayer’s approval rating among those who posted on the employer-review website Glassdoor.com has fallen to 73 percent from 99 percent after her July 2012 hiring.

At least a dozen members of Yahoo’s management team have left in the past year. The departures have included two of Mayer’s top lieutenants, former marketing and media chief Kathy Savitt and former development and acquisitions chief Jacqueline Reses.

Mayer has repeatedly expressed confidence that Yahoo is heading in the right direction, most recently during her October review of the company’s disappointing quarterly performance. “I have very aggressive expectations for Yahoo’s core business,” she said. “We have the right talent, the right strategy, and the right assets to drive long-term sustainable growth for our investors.”

Yahoo’s revenue fell 8 percent from the previous year after subtracting the company’s advertising commissions, its steepest decline since Mayer became CEO. It’s likely to fare even worse in the October–December quarter, given that the company expects net revenue to drop by about 20 percent.

Now Mayer is drawing up plans for another major shake-up, one likely to eliminate hundreds of jobs.

Now Mayer is drawing up plans for another major shake-up, one likely to eliminate hundreds of jobs as Yahoo sharpens its focus on “fewer products with higher quality,” as she said in October. Mayer promised more details in January.

It wasn’t supposed to get this bleak with Mayer at the helm.

It wasn’t supposed to get this bleak with Mayer at the helm. She came to Yahoo as a widely respected technology executive who had helped build Google into the Internet’s most powerful company while repeatedly outmaneuvering Yahoo with products that attracted more traffic and advertising.

Mayer’s arrival was supposed to herald a promising new era after the disheartening downfalls of the four CEOs that preceded her. Those executives—Terry Semel, Jerry Yang, Carol Bartz and Scott Thompson—either resigned or were dumped when it became apparent that they couldn’t revive the growth that made Yahoo one of the Internet’s biggest successes during the dot-com boom of the 1990s.

The moves haven’t really paid off, although Mayer continues to boast about Yahoo’s progress in the important mobile and video markets. None of Yahoo’s services rank among the top 50 free apps in Apple’s store, and the company’s expansion into original video programming resulted in a $42 million charge to account for the duds.

Investors are still awaiting proof that Tumblr or any other of Mayer’s acquisitions will be worth what Yahoo paid.

“Across all dimensions, her efforts haven’t delivered the results that people might have expected,” said S&P Capital IQ analyst Scott Kessler.

At one point in Mayer’s tenure, Yahoo’s stock had more than tripled from where it stood when she took over. The gains, though, were almost entirely tied to Yahoo’s large stake in Alibaba, which it acquired in a $1 billion deal negotiated a decade ago. That holding—in retrospect, Yahoo’s best investment ever—soared in value as Alibaba’s e-commerce bazaar boomed, prompting investors to snap up Yahoo shares in order to profit while Alibaba was still privately held.

When Alibaba went public last year, Yahoo sold a portion of its holdings and then announced plans to spin off its remaining $30 billion stake into a new holding company to avoid paying taxes on future gains. Now that strategy, too, is under a cloud; the Internal Revenue Service has declined to say that the spin-off will qualify for the expected tax exemption.

Mayer plans to complete the spin-off by January anyway. Starboard’s Smith thinks she has that exactly backward; he wants Yahoo to retain the Alibaba stake and sell its websites, mobile applications, and advertising services. It’s unclear who would buy them, given their malaise.

Kessler likens Mayer’s plight to a star quarterback who signs with a National Football League franchise that’s in the doldrums. “When the quarterback starts out, people get very excited about the potential and opportunities,” he said. “But when the performance on the field turns out to be less than stellar, people are understandably going to blame the quarterback that came in with so much fanfare.”