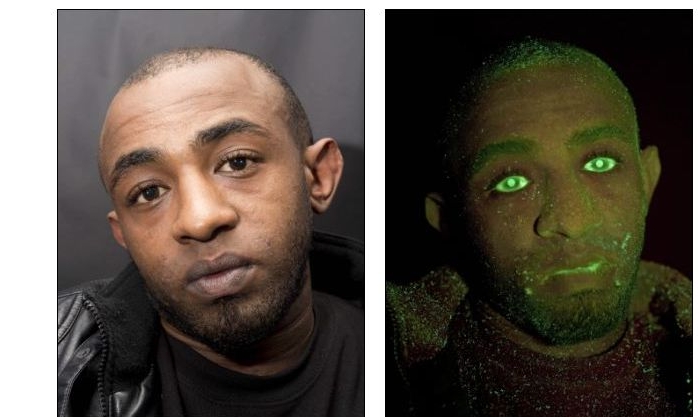 A screenshot of the Daily Mail shows Yafet Askale with the SmartWater on him.
UK

Yafet Askale, a U.K. laptop thief, was convicted after he was sprayed with an invisible substance, SmartWater, that could trace him.

Photos of Askale covered in the luminous green spray were published Monday, showing his face, mouth, and eyes covered in it.

Askale was sprayed when he stole a laptop from a police “trap car” in Harlesden several months ago.

SmartWater glows green when shown under ultraviolet light. Askale apparently did not know that he was hit with it.

Detective Inspector Madeline Ryder of Brent Police told the Daily Mail: “The trap car forms part of an overall crime reduction strategy designed by SmartWater, which is an effective weapon in the armory of tools that we routinely use in Brent. We will continue to target those who are insistent on committing these types of offense.”

She added: “This is another excellent example of the thorough work completed by Brent Officers. Using the trap car technology, we were able to charge Askale and put him before the courts.”

Askale, who is from Harlesden, received a 49-hour community service sentence and was told to pay $650, Reuters reported.

Police released the photos of him as a warning not to steal from cars in the area.

According to the Belfast Telegraph, Brent Police have been using SmartWater to equip homes and cars to deter thieves.