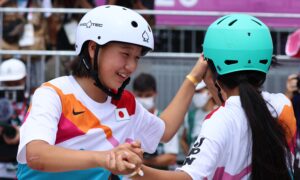 Here’s some of the latest buzz from around the WWE:

When CM Punk signed with the UFC over the weekend, CEO Dana White stressed that Punk isn’t like Brock Lesnar, who was a former collegiate wrestler.

“He wanted to fight here. He wanted to give it a shot, so we gave him an opportunity. It’s not like Brock Lesnar. We’re not going to throw the kitchen sink at him. Lesnar had a wrestling background. (CM Punk) going to fight a guy who is 1-0, 1-1, 2-1 — something like that,” White said, per Cagesideseats.com.

Lesnar eventually took the UFC heavyweight championship before he suffered consecutive losses to Cain Velasquez and Alistair Overeem before retiring.

Meanwhile, Lesnar was added to EA Sports UFC over the weekend.

After suffering injury from Bray Wyatt during SmackDown, Dean Ambrose is now cleared.

The WWE issued an update on his status.

“As you saw on SmackDown, Bray Wyatt struck Dean Ambrose in the neck with a chair, and as a result of that, he had sustained brunt and crushing trauma to the front part of his neck,” Dr. Amann said to WWE.com. “There are many vital structures there including the windpipe and the trachea. Our initial diagnosis was a crushed trachea with inflammation or a tracheal contusion.”

The WWE then said “that Dean Ambrose has been cleared for active competition.”

Over the weekend, Roman Reigns got married to his fiancee Galina Joelle Becker.

Photos of him and his wife were uploaded to his Instagram page.

According to WrestlingInc, the marriage took place at Disney’s Castaway Cay, which is a private destination for its cruise line.

Also, there has been speculation that Reigns will replace Ambrose. But according to WrestleZone, those rumors were “started because of an inaccurate transcription of Dave Meltzer and Bryan Alvarez’s podcast.”

“Meltzer speculated that WWE could add Roman Reigns to the show to face Wyatt to give him a solid win before January’s Royal Rumble match, but it was in no way a ‘report’ or ‘confirmation’ that the angle will take place,” it added.

Dolph Ziggler took to Twitter to hit out at John Cena, saying fans should vote for him for the Social Media Champion Slammy Award.

“Vote @JohnCena for social #SLAMMY if youre into cut & paste tweets, like most pouty teens quoting Marilyn Monroe on Facebook,” he wrote.

He added: “If you’re into me putting anyone and EVERYONE on blast with a roast-esque acceptance speech, vote for me.”

Cena will appear on Monday’s RAW in Greenville, South Carolina.