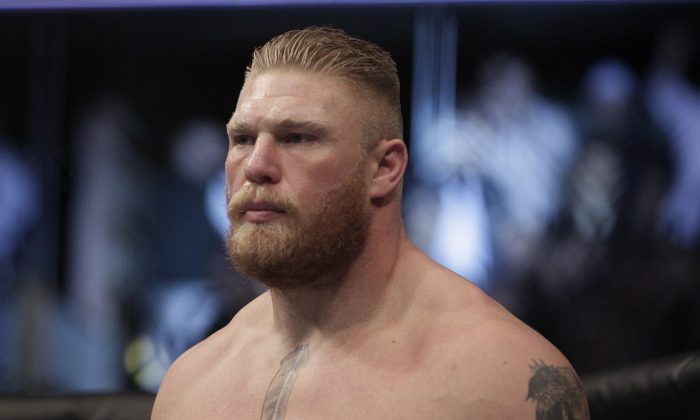 Brock Lesnar, the current WWE heavyweight champion and former UFC champ, might be returning to television in January.

Wrestling Observer reported that Lesnar vs John Cena could happen during the TLC pay-per-view.

“Well, thankfully it seems as though WWE might be rethinking those plans. The main event ofRoyal Rumble is the Royal Rumble — it’s one of the few PPVs that legitimately doesn’t need the champ, so the new plan, according to The Wrestling Observer, is to move Lesnar’s PPV return toTLC. The two main matches for TLC would be Lensar vs. Cena for the championship and Seth Rollins vs. Randy Orton,” according the publication, via Uproxx.

The rumors come as others say Lesnar might be coming back to the UFC next year.

Dave Meltzer, via his radio show, said he received word from his sources that Lesnar is considering leaving the WWE next year so that he can go to the UFC.

“I can say this, at the moment [Brock Lesnar] is leaning towards UFC. As far as what’s going to happen, I couldn’t tell you, but I can say that as of this morning he’s not been talked to by Bellator, I can say that now,” he said on his show, via CageSideSeats.

His assertion comes after UFC boss Dana White said Lesnar won’t go to Bellator, a rival of the UFC.

He added: “If he’s ready, he’ll come back. If he’s not, he won’t. He was huge for us but it’s not like ‘oh my god, we have to get Brock Lesnar back’. This is fighting; you have to want to fight, you have to want to do it. If Brock wants to come back I have a great relationship with him and the door is open for him. If he doesn’t, I wish him all the best,” according to CageSideSeats.