Writer G. Edward Griffin Says Shen Yun Is ‘The Top of the Craft’ 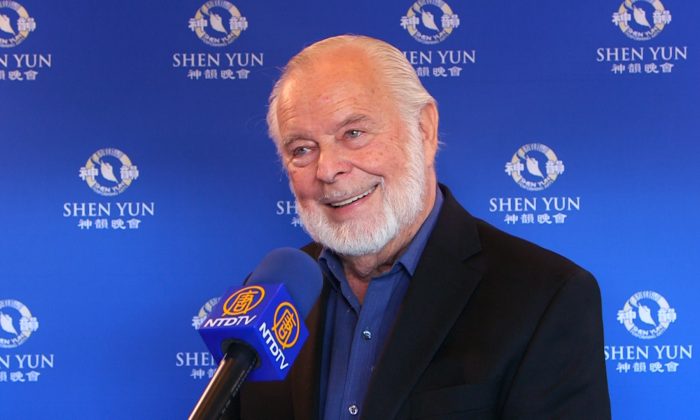 THOUSAND OAKS, Calif.—G. Edward Griffin is no stranger to controversy in the face of standing up for what you believe in; he penned several books and filmed multiple documentaries on these matters.

At first glance, Shen Yun Performing Arts is anything but controversial—universal stories of compassion and culture told through the universal languages of music and dance—that is, unless you’re in China. There, the Chinese Communist Party has oppressed the traditional Chinese culture of 5,000 years, and the classical Chinese dance company is banned from performing.

“I think it’s marvelous, of course,” said Mr. Griffin at the Fred Kavli Theatre on March 23. There was such a compassion embedded in the performance, and in addition to the “extremely high level of creative professionalism,” Shen Yun, to Mr. Griffin, pointed out clearly what the people of China today are being denied because of the communist regime.

There aren’t many experiences at a higher level than this one.
— G. Edward Griffin

Mr. Griffin said he was against all forms of collectivism, and China is in the grips of it. Anything that is different from the collective, in this case, the communist regime, is considered an enemy. It’s an ideology that damages. It is different entirely from the concept of teamwork and support evident in how Shen Yun artists worked together, he explained through an interview.

“At many levels [Shen Yun] has spoken the truth,” he said.

Mr. Griffin is well known for being the author of “The Creature from Jekyll Island,” which opposes the Federal Reserve and is famous for having contributed to conspiracy theories. Some of his ideas are better accepted than others, though his body of work as a whole has had global impact in promoting understanding and provoking thought about otherwise complicated and prevalent topics like banking, disease, and foreign policy.

He felt uplifted, encouraged, and supportive of Shen Yun’s mission to revive the authentic traditional Chinese culture, as well as completely entertained by the creativity and professionalism of the performance, he added.

“You cannot help but be awed by it and also highly entertained,” he said. In fact, he had seen Shen Yun a couple of years ago and enjoyed it so much he had to return. The high standard of production remained the same, he said, but the program is different every year.

This year’s lineup included a story from the famous Chinese epic “Journey to the West” and the legend of “The Lady of the Moon,” classical Chinese dances set in the Tang and Sui Dynasties, as well as a story of one of China’s most revered emperors.

“I’ve never seen anything better. It’s the top of the craft. It’s what everybody talks about, and I’m greatly impressed by it,” Mr. Griffin said. He’s produced a few documentary films himself, “so I know the techniques that [are] used are the cutting edge and the very latest.”

A digital backdrop and orchestra blending East and West accompanies the whole production, which is primarily classical Chinese dance, and some ethnic and folk dances from across China. The program also lists solo bel canto vocalists.

“The production is so seamless,” he said. “So many things could go wrong at the drop of a hat but nothing goes wrong … The fact that you don’t think about the team is evidence that the team is so good.”

In fact, it was like nothing else he’d seen.