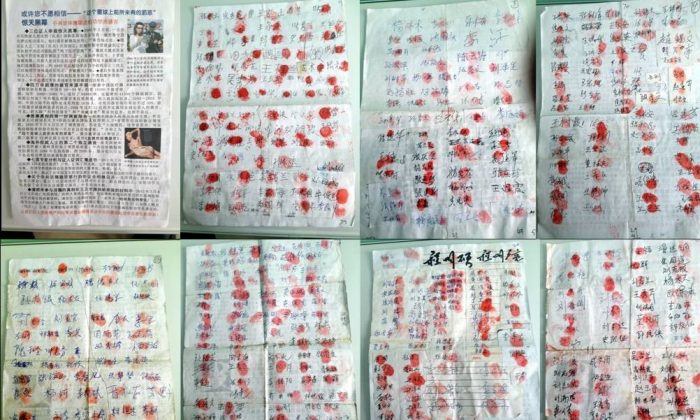 A number of the signatures on the anti-organ harvesting petition circulating in cities across northern China. (minghui.org)
China

For the last two decades, China’s communist regime is believed to have engaged in the harvesting of organs from still-living political and religious prisoners. In the early stages, Uyghur muslims are believed to have been targeted, according to researchers; later, it was practitioners of the repressed spiritual group Falun Gong who became the primary source of illicit organs transplants in China.

Investigative researchers estimate that since shortly after 1999, when the Communist Party launched its campaign to destroy Falun Gong, tens of thousands of people have been murdered for their body parts, which are sold to both domestic and international clients.

Though the crime of organ harvesting has been increasingly publicized in the free world since the mid-2000s, the Chinese regime maintains a tight clamp on all information and news about the killing.

Despite this, a mainland Chinese petition condemning organ harvesting has attracted over 50,000 signatures, according to reporting by Minghui.org, a website run by Falun Gong practitioners to document the persecution. Recently, over 5,000 people signed the petition in Hebei, a populous northern province surrounding China’s capital, Beijing.

In the sixteen years of systematic, nationwide persecution of Falun Gong, the communist regime has used its state propaganda apparatus to demonize the practice in the public eye. Behind the scenes, public security and the judicial branch have been employed to detain, arrest, sentence, and brainwash Falun Gong adherents.

The Minghui report gave several anonymous comments collected by practitioners conducting the petition in Hebei. Due to the difficulties in obtaining precise or detailed information from mainland China and due to safely concerns, names and locations are often omitted in the website’s reportage.

“I think [organ harvesting] is even worse than fascism,” said one Chinese signatoree. “As a Chinese with a conscience, I find it the most reprehensible.”

“The Communist Party is beyond evil to harvest organs from living Falun Gong practitioners. It has no moral bottom line,” said another.

One Falun Gong practitioner spoke with a group of people looking at the petition and an anti-organ harvesting pamphlet, according to the Minghui report.

“I don’t dare sign,” one man told the practitioner. He was immediately rebuked by another: “What do you mean ‘you don’t dare?’ This exposes the evil acts of the Communist Party and helps stop the persecution of good people. I’m not afraid.” The man then signed the petition and, as is Chinese custom, gave his fingerprint in red ink.

Outside China, over one and a half million people in 53 nations had signed similar petitions by the end of 2013.

An illiterate elderly woman, upon hearing about forced organ harvesting and seeing the illustrations on an pamphlet, said “the Communist Party is thoroughly evil! Look what they do to living, breathing people! I’ll sign!”

When she remembered that she could not write, she told the practitioner she was speaking with to write her name for her.

A retired cadre in his sixties read the flyer and petition form in detail, then quickly signed his name and gave his fingerprint.

“The Chinese Communist Party is the root of misfortune, it is the source of all our nation’s misery. Only by quitting the evil Party and casting out the specter of Marx and Lenin will China and its people have any hope for a bright future,” the man said.

The harvest of organs from detained Falun Gong practitioners started in 2000, according to the findings of several researchers. These include Canadian human rights lawyer David Matas and former Canadian Member of Parliament David Kilgour, who published their first investigative report in 2006, using 52 means of evidence to document the ongoing crime of organ harvesting in mainland China.

Ethan Gutmann, an American journalist, has written a book  titled “The Slaughter,” containing years of research and interviews into the practice and victims of organ harvesting in China.