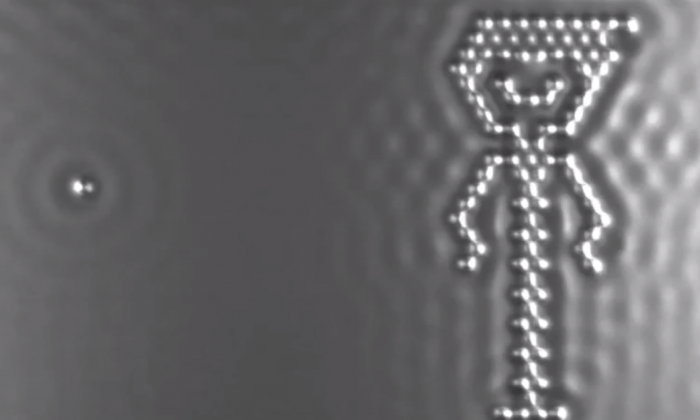 A screen shot of the atomic scale movie shows the image of a boy and his ball, made of a single atom (IBM)
Science

Researchers release 'A Boy and His Atom', a stop-frame animation at a magnification of 100 million
By Simon Veazey

Scientists released the world’s smallest movie on May 1, a stop-frame animation that uses atoms in place of plasticine models, CGI or drawings.

Researchers at IBM used a Nobel-Prize winning microscope to capture images of atoms at a magnification of over 100 million.

The creators of the movie, called ‘A Boy and His Atom’ say its credentials as the world’s smallest movie have already been verified by the Guinness World Records.

The short film of nearly 250 frames shows a boy playing with a ball. The ball is in fact an atom.

The copper atoms were manipulated by a needle that “feels” the atoms and is able to pull them to specific locations.

“Capturing, positioning and shaping atoms to create an original motion picture on the atomic-level is a precise science and entirely novel,” said Andreas Heinrich, principle investigator, IBM Research in a statement. “This movie is a fun way to share the atomic-scale world while opening up a dialogue with students and others on the new frontiers of math and science.

But the atomic scale filming microscope isn’t going to be ready for home movies just yet.

“It weighs two tons, operates at a temperature of negative 268 degrees, ” said Christopher Lutz in a statement. “The ability to control the temperature, pressure and vibrations at exact levels makes our IBM Research lab one of the few places in the world where atoms can be moved with such precision.”