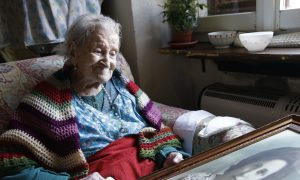 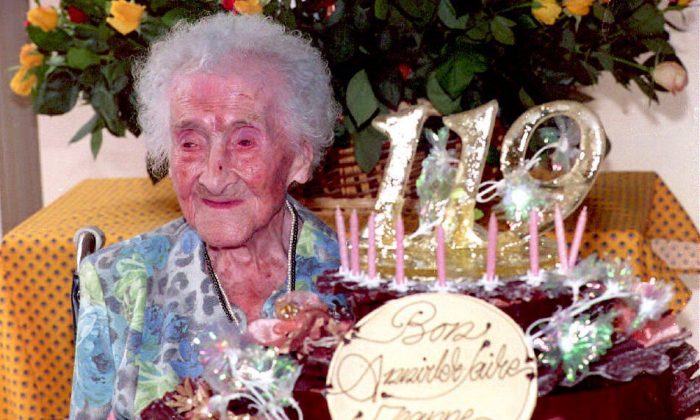 Jeanne Calment, the world's oldest woman according to the Guinness Book of Records celebrates her 119 birthday in France, Feb. 21, 1994. (Eric Cabanis/AFP/Getty Images)
International

World’s Oldest Person Jeanne Calment Might Have Been a Fraud

Famous for holding the title as the world’s oldest person, the French woman Jeanne Calment, may have been a fraud, according to a new theory by Russian researchers.

However, Nikolai Zak, a mathematician and member of the Society of Naturalists of Moscow University, wrote in his study “Jeanne Calment: The Secret of Longevity” that he believed the French woman “took the identity of her mother.”

Zak told the Agence France Press (AFP) that he analyzed biographies, photos, and archives from Arles, the city in southern France where Calment lived and drew his conclusion.

“The analysis of these documents led me to the conclusion that the daughter of Jeanne Calment, Yvonne, took the identity of her mother,” Zak told the AFP.

His paper is supported by gerontologist Valery Novoselov and states that the real Jeanne Calment died in 1934 at the age of 59.

“The phenomenon of Jeanne Calment could … be used as an example of the vulnerability of seemingly well-established facts,” it reads.

The paper is not peer-reviewed and relies exclusively on circumstantial evidence, reports the National Post.

For instance, one of the paper’s key evidentiary points is a Facebook poll of 224 people reporting that Calment did not “look” like a supercentenarian.

Novoselov told the AFP he “always had doubts” about Calment’s age. He said Calment was “sitting without support” and had “no signs of dementia.”

However, Zak does provide evidence to show that Calment seemed to bear a closer resemblance to Yvonne than supposed photos of herself as a young woman. The paper cites reports from witnesses, including a former mayor of Arles, saying that she looked and acted younger than her purported age.

In the paper, Zak also shows that in interviews, Calment often made several tiny inconsistencies regarding age factors, such as confusing her husband and father or saying that she was accompanied to school by a family maid who would have actually been 10 years her junior, reported the National Post.

Another curious factor is that Calment had most of her personal papers destroyed rather than turning them over to the local Arles archive.

“Intentional, remote destruction of photos and family archives after moving to the nursing home suggests that Jeanne had something to hide,” the paper states.

However, it also acknowledges that destroying personal records is not out of the ordinary for people, especially centenarians, who have outlived their friends and family.

These theories have been dismissed by Jean-Marie Robine, a French demographer and gerontologist who helped validate Calment’s extreme age in the 1990s for the Guinness Book of World Records. He said he “never had any doubt about the authenticity of the documents.”

“All this is incredibly shaky and rests on nothing,” he told Le Parisien. He said that he and a colleague made sure to ask Calment questions that only she would know the answers to, such as the name of her math teacher. “Her daughter couldn’t have known that,” he said.

On the other hand, Nicolas Brouard, the director of research at the French Institute of Demographic Studies, told AFP he thinks Zak’s paper is “very good work” and said the only way to truly know is to have the bodies of Jeanne and Yvonne Calment exhumed in order to determine how old they were.

If Calment’s record is canceled, the American Sarah Knauss will be named the world’s oldest person. Knauss died in 1999 at the age of 119.