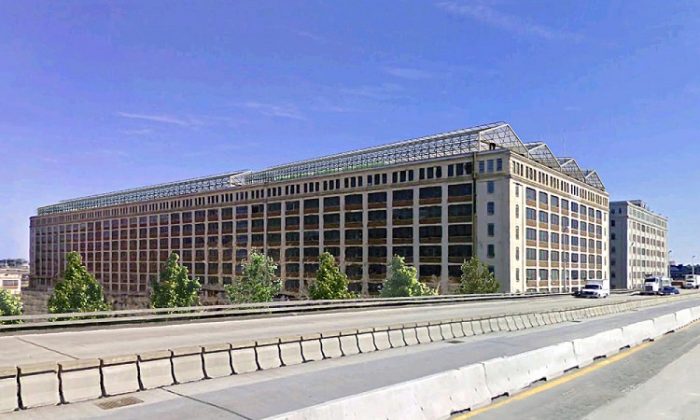 A rendering of the greenhouse on top of an abandoned warehouse in Sunset Park, Brooklyn. (Courtesy of BrightFarms)
US

Construction could begin as early as the third quarter of this year, with an expected opening in early 2013.

Hydroponics is a growing technique that replaces soil with gravel or small rocks and regularly pumps a nutrient-rich solution through the system to bolster plant growth.

Claiming to be the world’s largest rooftop farm, the “multiacre farm … will be built on 100,000 square feet of rooftop space, establishing a new national model for urban agriculture,” according to a release.

Up to 1 million pounds of produce, including tomatoes, lettuces, and herbs, will be grown every year.

BrightFarms will sell the produce to a supermarket, according to a spokesperson.

BrightFarms is partnering with Salmar Properties to create the farm. Salmar is currently redeveloping the 1.1 million-square-foot abandoned warehouse after buying the property for $10 million last May, according to a mayor’s office document. The company is investing approximately $35 million to turn the warehouse into an industrial center. The city expects 1,700 new jobs from the development.

BrightFarms has been involved with multiple projects in the city, including building instructive greenhouses for Brooklyn’s Cypress Hills Community School and the Manhattan School for Children on the Upper West Side.