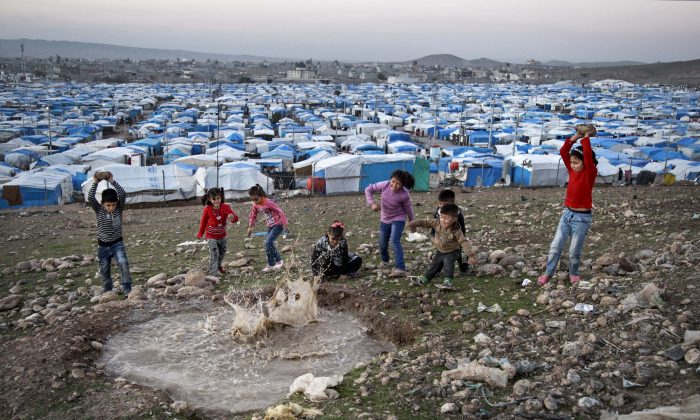 It is April 2016 in a settlement of Syrian refugee tents on the plateau of Bekaa, Lebanon. The winter has been tough; plastic sheeting does little to stop the cold from penetrating the tents. Many women talk to me about their children’s problems. No access to safe drinking water means diarrhea is rife and children are going to school only half the time due to a lack of places in Lebanese schools. Other women discuss the difficulty of covering the costs of their medical needs.

Every week they receive a visit from Syrian medical doctors who volunteer their time to help their peers. Other Syrian professionals have created health centers where all consultations and medications are provided for free. In other settlements, a network of Syrian and Lebanese teachers has created school classes in tents in the middle of the other family tents.

While the role of humanitarian actors helping those who need it most remains, the fact is that these refugees remain completely ignored and neglected, apart from the generosity of rich Lebanese and Syrian individuals who are providing for these grass root initiatives. So what has happened to the traditional humanitarian system?

In Istanbul, not far from Lebanon, the first World Humanitarian Summit is taking place. Born from the protracted crisis in Syria, big hitters from the sector will gather to discuss the future of humanitarianism—the perfect opportunity to address this question.

It’s disappointing then to note the four main themes on the agenda: the effectiveness of humanitarian aid, humanitarian principles, the role of local actors and financing mechanisms.

Sound familiar? That’s because these questions are repeatedly discussed at length in the sector, in political circles and in the media. But it’s unlikely any solid action will stem from the event, let alone anything new or groundbreaking. And here lies the inherent problem: where has all the innovation gone?

From Afghan Red Cross volunteers arranging for wounded patients to be evacuated by private taxis, to the introduction of Plumpy’nut paste in nutrition therapeutic centers during major famines, innovative and seemingly simple solutions save countless lives. The scale of the global humanitarian challenge that is facing us is simply too huge for us to no longer think outside the box.

The terrible images of Alan, the little child dead on a beach so close to home, moved the European public. Every day, men and women die because their basic needs are not met—they lack simple health care, food, and clean water. And what do we see as a result of our governments’ reaction?

On the island of Lesbos in Greece, detention camps hold people in deplorable conditions, their fate to be decided by technocrats. We see a Europe that is closing its doors to all these people affected by war. Europe signed an historic “one in one out” agreement with Turkey. But is this the Europe—an in-humanitarian Europe—that we wanted to build?

How symbolic to organize the world summit at the foot of the closed doors of Europe in the country that hosts the largest number of refugees in the world.

The recent withdrawal of Médecins Sans Frontières (MSF or Doctors Without Borders) from the summit is a wake-up call to the world. The charity said in a statement that the summit has become a fig-leaf of good intentions that allow systematic violations to be ignored. The naked truth is that, and more.

Today, too many organizations are obsessed by internal bureaucracy. Others seem to be only interested in the potential to boost the image of their “brand”—akin to an exercise in marketing.

We must make a return to constructive criticism, which has been the genesis of international and national non-governmental organizations and their motor for action, and remains so for a small few. We need to retrieve the spirit of risk-taking (which some have not lost). Innovations such as mHealth—health care and support delivered by mobile—alternative partnerships and financing or promoting refugee-led initiatives such as those in Lebanon need to be tested and failure not be seen as negative.

Creating a dialogue between a variety of humanitarian actors is to be applauded but not lauded. What could an innovative global humanitarian summit result in? Providing more flexible funding to organizations working in very dangerous areas, reforming the United Nations financing system and its inefficiencies, and extra support for the refugee-led initiatives are all realistic … but sadly are unlikely to be realized.

Back in Bekaa, the women see that international funding is shrinking and fear for a time when the international community forgets about them. Behind the hills, just 15 kilometers away from the tents, a fratricidal war is taking place. Whatever the outcome of this war, they all know their lives will never be the same again.

These are brave people with very little. Those with much more can afford to take some risks. Now is the time.

Karl Blanchet is co-coordinator of public health in humanitarian crises at London School of Hygiene & Tropical Medicine in the U.K. This article was originally published on The Conversation.