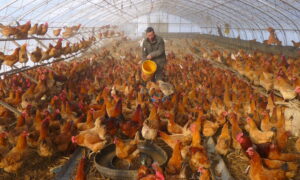 One of my favorite weekly diversions this summer has been the latest season of Jerry Seinfeld’s “Comedians In Cars Getting Coffee.” As in past seasons, Seinfeld has released a new episode each Thursday featuring a car (or two) and a comedian.

This week, the season finale (why so soon, Jerry, why?), features another of my favorites: Jon Stewart.

I set up the kids with enough activities to keep them busy for twenty minutes, grabbed my own cup of coffee (a must–it’s impossible to watch this and not want coffee.), and settled in for the most entertaining content gracing the internet these days.

As always, it was a gem, but worlds totally collided (you see what I did there?) when the pair drove out of the tunnel and caught sight of people practicing Falun Gong, which my family and I practice. They stopped to notice, exchanged some comedian banter, and went on their way.

It was a brief moment, but they, in a unique way, managed to shine their enormous spotlight on an issue that needs more attention.

The practitioners of Falun Gong (also called Falun Dafa) were performing their simple, slow-moving exercises in front of the Chinese Consulate, as New York practitioners have been doing day after day, for years. Why?

They do it to peacefully raise awareness of the horrific persecution of Falun Dafa practitioners that has been underway in China since July of 1999 and continues today.

It was on July 20th, fifteen years ago, that Chinese Communist Party leader Jiang Zemin deemed it illegal to practice Falun Gong, apparently feeling threatened by the immense popularity of a practice that centers on the principles of truthfulness, compassion, and tolerance. Since then, practitioners of Falun Dafa in China have been rounded up and subjected to forced labor, brain-washing, torture, and forced organ harvesting.

Almost fifteen years later to the day, the unlikely duo of Jerry Seinfeld and Jon Stewart (cameras rolling) happen upon this ironic and moving sight: a free, American sidewalk in front of the Chinese Communist Party’s Consulate hosting Falun Dafa practitioners doing what they do freely around the world and showing all who pass by and the millions more who watch the show, how utterly ridiculous and sad their persecution is.

“What do we got going here? Falun Gong?” Stewart remarks, as Jerry brakes in front of the Consulate. “Yeah,” he says, seemingly familiar with this sight.

“This is some Gandhi (expletive)—peaceful, nonviolent protest…” Stewart says. Seinfeld quips, “I like that they all have a hat. That’s probably not their intended, political takeaway for me.”

Haha. Probably not, Jerry Seinfeld, but you’ve just done an enormously good thing by helping to raise awareness of atrocities befalling innocent, good people. Hats off to you both.

Check out this episode of Comedians In Cars Getting Coffee. Don’t forget to grab a cup for yourself first, though.

Barbara Danza
writer
Follow
Barbara Danza is a mom of two, an MBA, a beach lover, and a kid at heart. Here, diving into the challenges and opportunities of parenting in the modern age. Particularly interested in the many educational options available to families today, the renewed appreciation of simplicity in kids’ lives, the benefits of family travel, and the importance of family life in today’s society.
barbaradanza
TOP NEWS