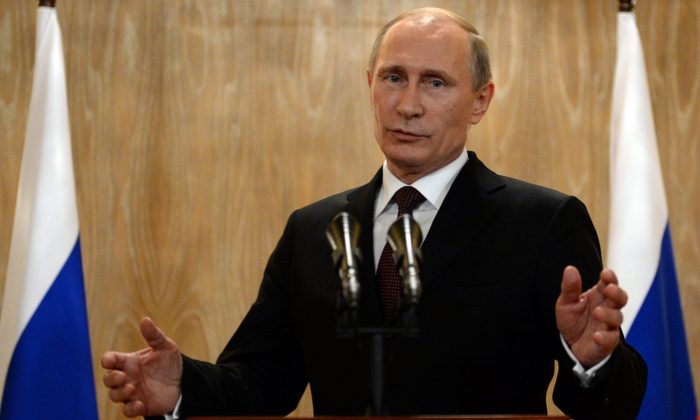 Russian President Vladimir Putin speaks at a news conference after the ASEM summit of European and Asian leaders in Milan, Italy, Friday, Oct.17, 2014. Putin met with Ukrainian President Petro Poroshenko and key Western leaders in an attempt to negotiate a full end to hostilities in Ukraine that could ease sanctions against Russia. (AP Photo/Vasily Maximov, Pool)
Europe

Russia’s President Vladimir Putin has threatened the West with his country’s 5,000 nuclear warheads.

Putin has raised the specter of nuclear war for the third time in the past two months as he and Western countries such as the United States clash over the Ukraine conflict, which has been bringing to light other deep-seated animosity.

Putin made his latest comments while en route to the annual Asia-Europe Meeting in Milan, a summit of 50 nations.

“We hope that our partners will realize the recklessness of attempts to blackmail Russia, and will remember the risks that a spat between major nuclear powers means for strategic stability,” Putin told Serbian newspaper Politika.

“He’s again threatened the West with nuclear weapons,” John Besemeres, a Russia expert at the ANU, told the Sydney Morning Herald. “It seems like a mastubatory fantasy he can’t go without.”

The comments came as New Zealand’s Prime Minister John Key revealed he was bantering with Russian Prime Minister Dmitry Medvedev earlier this year when the latter brought up the issue of nuclear war.

“So we’re having this joke exchange and one point I said to him: ‘How long would it take a missile to get out from Moscow to NZ?'” Key recalled.

Medvedev briefly consulted an aide before turning back to the NZ leader. Key said: “He said, ‘Don’t worry, I’ll let you know before it happens.'”

And Putin has referenced the warheads two other times recently. In mid-August he told members of Russia’s Duma that he soon planned to “surprise the West with our new developments in offensive nuclear weapons about which we do not talk yet.”

And in September he told a group of youth: “I want to remind you that Russia is one of the leading nuclear powers … It’s best not to mess with us.”

Besemeres, the Russian expert, said that “Putin’s Russia is heading towards a police state internally and a rogue state externally. It’s a very worrying combination.”

Andrew O’Neil, a professor of international relations at Griffith University with insight into Russian nuclear policy, said that there’s one key area in Australia on Russia’s target list–the United States-Australian joint facilities that monitor satellites that fly over eastern Russia.

Dr. Helen Caldicott, an Australian physician who founded the International Physicians against Nuclear War, recently told reporters in Washington, D.C. that a war between Russia and the U.S. would automatically include nuclear weapons.

“There is no way a war between the United States and Russia could start and not go nuclear,” she said.

“The United States and Russia have enormous stockpiles of these weapons. Together they have 94 percent of all the 16,300 nuclear weapons in the world.”

“We are in a very fallible, very dangerous situation operated by mere mortals,” she warned. “The nuclear weapons, are sitting there, thousands of them. They are ready to be used.”

Russia surpassed the United States for the first time in number of nuclear warheads that are deployed, according to a recent report from the State Department.

“The warhead count for the Russians, based the Sept. 1 report required under the 2010 New Strategic Arms Reduction Treaty (START), shows an increase of 131 warheads since the last declaration on March 1,” it said.

“The U.S. reported a warhead increase of 57 during the same period. It is not clear why the warhead numbers increased.”

Sen. James Inhofe of Oklahoma, ranking Republican on the Senate Committee on Armed Services, wrote in an op-ed in Foreign Policy in reaction to the news that Russian deception in negotiating an arms reduction treaty while building up nuclear arms “poses a direct threat to the United States.”

He said that Russia violated a previous treaty while negotiating the most recent treaty, the START, with the Obama administration. “The White House was at best nave to Russian duplicity; at worst it was complicit,” he said.

Mark Schneider, a former Pentagon strategic weapons specialist, said that the build up confirmed vows by Russian officials to increase their deployed warheads.

“While so little information is released under New START that there is no way to say for sure, the Russian increases appears to reflect the arming of the two new Borey class ballistic missile submarines,” Schneider said.

“All U.S. numbers have declined since New START entry into force. The fact that this is happening reflects the ineffectiveness of the Obama administration’s approach to New START.”